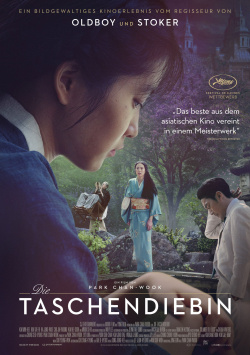 Korea in the 1930s: Beautiful Lady Hideko (Kim Min-Hee) lives with her bossy uncle (Cho Jin-Woong) on the large family estate that she has not been allowed to leave since childhood. The house, which combines English and Japanese architecture in a fascinating way, has a large library, which is Lady Hideko's uncle's greatest passion. Here he keeps some very special books, in which stories full of unbridled eroticism are told. Once a month, wealthy clientele are invited, to whom Lady Hideko then has to read from those books. The young woman may be rich, but she is also extremely unhappy in her situation - for the deceitful Count Fujiwara (Ha Jung-Woo) a found food. With the help of pickpocket Sookee (Kim Tae-Ri), who is hired as a maid for Lady Hideko, Fujiwara wants to marry the unstable woman in order to have her committed to an asylum after the marriage and to get his hands on her entire fortune. It's an elaborate plan, but one that is turned completely on its head when Lady Hideko and Sookee develop feelings for each other.

Following his first English-language film, Stoker, exceptional director Park Chan-Wook (Oldboy) now returns to Korean cinema with The Pickpocket. Based on the novel As Long As You Lie by British writer Sarah Waters, he has directed a fascinating, sensual and wonderfully wicked tale of deception, forbidden passions and deceit. He has moved the action from Victorian England to colonial Korea in the 1930s. This is not the only change Park Chan-Wook has made to the original. Rather, he extracted the important motifs of the novel and enriched them with his very own vision. And those who are familiar with the films of this extraordinary director know that only something great can come out of this.

And so it is. The mesmerizing sets and engaging camerawork make for a visual language that immediately hooks you into the action. The various plot twists are really artfully woven into the story told from alternating perspectives, so that it always remains exciting and surprising, even if you are shown some sequences multiple times (with the change in perspective always revealing new details that take the action in a different direction). Whether humor, sex or violence are used - and Park Chan-Wook is known for not being exactly squeamish with the latter two in particular - it always comes across as appropriate and never purely provocative, as is often the case with other filmmakers.

The Pickpocket is artful entertainment cinema with high show values, great actors and a really great direction that makes the film so successful on several levels. While it's not Park Chan-Wook's best film, this intriguing adaptation of the novel underpins his excellence as a filmmaker. For that, it definitely gets a: Absolutely worth seeing!

Cinema trailer for the movie "The Pickpocket (Südkorea 2016)"
Loading the player ...