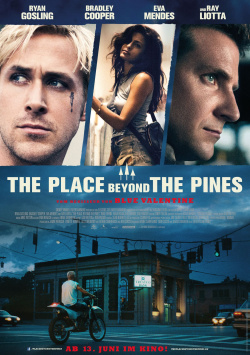 Motorcycle stuntman Luke (Ryan Gosling) is a taciturn loner who moves from town to town with a spectacular show at a fair. He doesn't think about a steady relationship any more than he thinks about settling down in one place. But when he learns that he fathered a son with waitress Romina (Eva Mendes) during a one-night stand a year ago, he decides to completely turn his life around. The fact that he has no job and Romina another man, he cares little. He only wants the best for his son. The offer of the mechanic Robin (Ben Mendelsohn) comes just in time: he suggests Luke to use his talent as a motorcyclist to rob banks. The robberies, carried out at lightning speed, bring Luke and Robin lots of money. But the stuntman is getting bolder and more careless. And so it comes to pass: a robbery goes wrong and, on the run, Luke and ambitious small-town cop Avery Cross (Bradley Cooper) cross paths - a fateful encounter that will have a lasting impact on the lives of many for years to come.

With The Place beyond the Pines, director Derek Cianfrance has crafted a truly gripping and moving drama that is superior to its acclaimed predecessor Blue Valentine in almost every way. Both films share intense imagery, excellent acting by the cast, and a production that strives to be realistic. In The Place beyond the Pines, this is achieved by the fact that Cianfrance shot in Schenectady in many real places with real people. Whether it's police officers, hospital staff, patients, or fairgoers, these are all real residents of the small town who help give the film the authenticity that former documentary filmmaker Cianfrance wanted to achieve.

Where the two films differ, however, is in their impact and the manner in which it is achieved. True, like Blue Valentine, The Place beyond the Pines is at its core a rather intimate drama that is a bit unwieldy in its storytelling and therefore unlikely to appeal to a wide audience. Nevertheless, the impression left by the story of family heritage, guilt and atonement is of an intensity that few films can match. This is not only due to the excellent acting of Ryan Gosling, Bradley Cooper or Dane DeHaan (Chronicle - What are you capable of?). Down to the smallest supporting role, the drama is almost perfectly cast, which of course contributes significantly to making the film work. But what is crucial to its lasting impact is the way Cianfrance tells his story. To do this, he employs a stylistic device that hasn't been implemented in such a radical and cleverly constructed way since Psycho.

Whenever a viewer becomes attached to the story and its main character, Cianfrance inserts a stark break and switches the focus to another character. While Alfred Hitchcock only did this once in Psycho, there are two such changes of perspective in The Place beyond the Pines, one of which also involves a major time jump. So there is definitely the feeling that you get to see three films in one here, even though the stories are directly connected and can only unfold their full effect together.

How much personal decisions can have an impact on other people, what we pass on as a legacy to our children and how the next generation also have to suffer the consequences of their parents' actions, all this is impressively illustrated here by means of what is actually a small story. With filigree narrative art Cianfrance weaves elements of thriller and family drama into a gripping whole, which sometimes weighs heavily on the mind and leaves the viewer after almost two and a half hours not necessarily happy from the cinema. Whoever gets involved will be rewarded with first-class arthouse cinema from America, which offers visually, acting and dramaturgically very high level. Absolutely worth seeing

Cinema trailer for the movie "The Place beyond the Pines (USA 2012)"
Loading the player ...