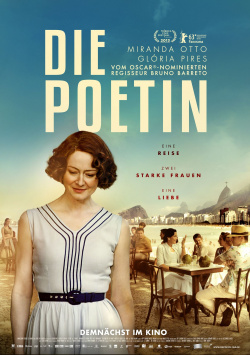 Poet Elizabeth Bishop (Miranda Otto) suffers from severe writer's block. A trip to Rio de Janeiro to visit her college friend Mary (Tracy Middendorf) is supposed to get her creative juices flowing again. But at first this plan doesn't seem to work out. Mary's partner, the architect Lota de Macedo Soares (Gloria Pires), is as intimidating to the New Yorker as the Brazilian mentality, which is completely foreign to her. But the longer she lingers in the idyllic place, the more she is able to surrender to its enormous sensuality. When Lota's rejection turns into enormous affection and the two women become lovers, Elizabeth is also finally able to write again. When her work is showered with prizes and Lota receives what is probably the most important commission of her career with the design of Flamengo Park, everything looks like a happy future for the two women, both professionally and privately. But then fate shows its particularly destructive side.

The Poetess is based on the life of celebrated poet Elizabeth Bishop and her great love for Lota de Macedo Soares. However, director Bruno Barreto didn't want to just tell the love story between two mismatched women. Rather, he wanted to find something universal here that would not only appeal to a niche audience, but would offer every potential viewer a surface to identify with. And he found that in Bishop's poem One Art, which begins with the line: "The art of losing isn't hard to master. So The Poetess has not become a typical biopic, not a simple portrait of the great poet, but a moving film about losses and how to deal with them.

The story then begins right away with a loss: Elizabeth Bishop`s loss of her ability to write. Here it is shown that every loss can also be the beginning of something new. But due to the eternal cycle of life, even this is not eternal. The Elizabeth Bishop the audience meets at the beginning of the film is an insecure and rather weak woman who grows stronger and stronger in the new life she finds alongside Lota. And although she falls to alcohol, it does not weaken her again. On the contrary, she scales new heights creatively and is more celebrated for her work than ever before. Exponentially to this, Lota's initial strength increasingly diminishes. Although she too celebrates her greatest professional triumph at Elizabeth's side, by the end there is little left of the strong, confident woman she is at the beginning of the film - and this as a result of what is for her a devastating loss.

The film could easily have degenerated into a depressing tragedy given the rather tragic course of the story. But Barreto skilfully avoids this by enriching his production with plenty of poetic moments, very much in the spirit of Elizabeth Bishop. First and foremost, it is wonderful images, but also small snapshots that achieve this effect. On the one hand, The Poetess shows how close joy and sorrow can often be. But on the other hand, through its visual language and moments of quiet beauty, the film also radiates a positive mood that ultimately triumphs over the great sadness of the story.

Certainly, The Poetess is not a film for the broad mainstream audience. Nevertheless, Barretto's concern to stage the material in such a way that it appeals to more than just a small niche audience is definitely successful. The very good leading actresses, a story that works on several levels and last but not least the stirring camera work make The Poetess a work that can be recommended not only to lovers of strong women's stories, but also to friends of silent art house cinema in general. Worth seeing