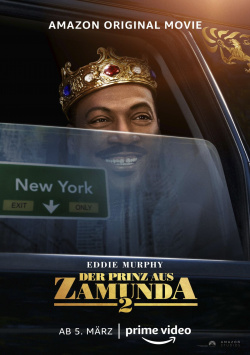 The Prince of Zamunda 2

For thirty years, Prince Akeem (Eddie Murphy), now king, and his wife, New Yorker Lisa (Shari Headley), have lived happily in the African kingdom of Zamunda. But the power-hungry General Izzi (Wesley Snipes) wants to wrest the throne from Akeem, and he might succeed, since Akeem and Lisa only have daughters, but no male heir to the throne, as is required by the law of the realm. But then Akeem learns that he fathered an illegitimate son (Jermaine Fowler) when he visited Queens thirty years ago. Together with his trusted confidant Semmi (Arsenio Hall), he travels back to New York to find his son Lavelle...

In 1988, Eddie Murphy landed one of his biggest box-office hits with John Landis' comedy "The Prince of Zamunda". What nobody really believed in has now - after all 33 years - become reality: "The Prince of Zamunda 2" is here! Actually, the comedy sequel was supposed to hit theaters last year, but then Paramount sold it to Amazon. I have to say that I was really looking forward to the movie, since for me the original is my favorite movie with Eddie Murphy next to "The Lucky Guys" and I have a lot of positive memories of the flick. What gave me high hopes was the fact that almost all of the main cast and even many of the supporting cast are back, and that the writers of the original were also back on the script.

In addition, lead actor Eddie Murphy and director Craig Brewer previously delivered a really compelling collaboration with the Netflix film "Dolemite Is My Name". All good omens for "The Prince of Zamunda 2"! I can tell you, I would have loved this movie so much. I tried! After many months with hardly any new movie fodder and really few reasons to laugh heartily, a successful second installment of the cult comedy would have been just fine. But after almost two hours with a little smirk and only one real laugh, I have to say bitterly disappointed that the return of Akeem and Sammi turned out more than weak.

While there was an attempt to push all possible nostalgia buttons. You really have to give the creators credit for that. But at the same time, the story was supposed to feel contemporary. And that's exactly what doesn't work. "The Prince of Zamunda" is a product of its time. The humor of 30 years ago was very different. It had a bit more rough edges, and in addition to simple, politically not always correct jokes, socially critical humor was also used - but rather subtly. Part 2, on the other hand, not only wants to be more family-friendly, but also wants to convey its positive messages more clearly. Unfortunately, this comes at the expense of the humour, which mostly plods along very bravely or, in the case of supporting characters such as Mary, played by Leslie Jones, is served up loudly and obtrusively.

In addition, Akeem is more and more relegated to a minor character in the second half of the film, revealing that Jermaine Fowler has neither the charm, nor the comedic talent with which Eddie Murphy had won the hearts of the audience* in the first part. And the fact that only 15 minutes of the film take place in America (although these scenes work best) is also a pity. Such weaknesses should be covered up with many dance interludes and tiring guest appearances by well-known musicians and other celebrities. However, this only seems to be an effort and similar to the initially still humorously served product placement at the end only flat.

Even if "The Prince of Zamunda 2" has the heart in the right place, this sequel is not only compared to the original, but also detached from it an unconvincing comedy, whose script is uninspired and whose implementation lacks any charm of the original. Perhaps there are fans of Part 1 for whom the numerous references and cameo appearances provide enough nostalgia to console them over the second film's shortcomings. For me, this reunion with all the beloved characters didn't work, which is why it gets a "Seeable" only with significant reservations. Let's hope things go better for Murphy's announced "Beverly Hills Cop" revival.

"The Prince of Zamunda 2" is available to watch now on Amazon Prime Video.