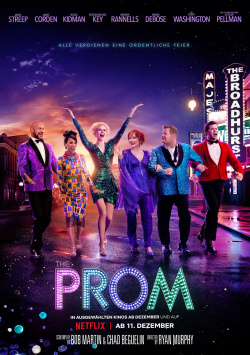 Broadway stars Dee Dee Allen (Meryl Streep) and Barry Glickman (James Corden) have a problem: Their costly new Broadway show is a huge flop, and with audiences, their popularity ratings have plummeted to near zero. Perennial understudy Angie (Nicole Kidman) and one-time series star Trent (Andrew Rannells) are also looking for the career boost they need. That's when the four come up with an idea: they want to burnish their image by doing a good deed - one that isn't too elaborate or even cost too much money. The problem of student Emma Nolan (Jo Ellen Pellman) fits perfectly: Since the lesbian girl wanted to go to the prom with her girlfriend in a small town in Indiana, the event is unceremoniously canceled by the head of the local parent-teacher association (Kerry Washington). Supported by the school's principal (Keegan-Michael Key), Emma plans to fight the cancellation - and now she's getting help from the self-centered city slickers. But their strident activism comes crashing to nothing, and they realize they can't change the minds of the stubborn small-towners when they're so out of touch with their own lives.

The film adaptation of the Broadway musical "The Prom" is a brightly colored feel-good movie par excellence. Yes, the whole thing is superficial and dripping with clichés. There is much that could be criticized about this film from Ryan Murphy ("Glee", "American Horror Story"). But despite its recognizable flaws, it's hard not to be infected by the ensemble's charm and enthusiasm for acting here. When Meryl Streep, for instance, sings "It`s not about me" as the diva-in-chief, and of course the songs are all about her anyway, it's a very simple gag - but one that's served up so delightfully and engagingly that it's simply a joy.

Anyway, the songs are immensely catchy. Like the overall dramedy, they are also quite simple in design, but serve their purpose to the fullest. One could accuse the film of burying its genuinely well-intentioned message for tolerance and humanity too much under the sugary kitsch layer of the production. Or that Murphy seems to have dropped the word subtlety from his vocabulary during filming. All of these are justifiable criticisms. For me, however, they don't really weigh heavily in the case of "The Prom". Because the bottom line is that the musical put me in an extremely good mood for over two hours and warmed my heart. And with that I can only say: goal achieved!

Because even though it deals with socially important issues, "The Prom" doesn't want to be a profound drama. Rather, it aims to promote greater openness, equality and tolerance with plenty of positive vibes. If you like musicals and don't expect more than light feel-good entertainment, this musical prom can be more than recommended to you. Absolutely worth watching!

"The Prom" is available now on Netflix