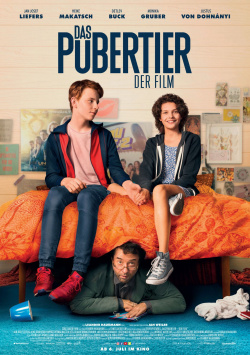 The Pubes - The Movie

How could this happen? Not long ago, Carla (Harriet Herbig-Matten) was Daddy's favorite, a little angel with horse posters on the wall. And now the soon-to-be 14-year-old girl has suddenly mutated into a rebellious, petulant pubescent. Father Hannes (Jan Josef Liefers) takes time off work to help his daughter through this difficult phase. After all, at this particular stage of life there are countless dangers he has to protect her from: hormone-driven boys, alcohol, drugs and and and. But what is well-intentioned quickly turns into a disaster, as Hannes is completely overwhelmed by the situation and doesn't miss a beat. And what Clara really doesn't need now is an embarrassing dad.

With Das Pubertier, a collection of 22 amusing stories from the life of a desperate father, Jan Weiler landed at the top of the bestseller lists for weeks in 2014. So it's no wonder that it didn't take long for Weiler to also sell the rights for a film adaptation. This book occupies a truly special position, as the rights for a cinema adaptation and those for a TV adaptation were awarded separately. As a result, the book was filmed twice, once for the cinema and once as a TV series for ZDF. Although the theatrical release was planned for autumn, it was brought forward when ZDF scheduled the broadcast date of the series before the original start of the film.

And so now Das Pubertier by Leander Haußmann (Sonnenallee) has come out on top. The cinema adaptation can score especially with its good actors. Jan Josef Liefers is perfectly cast as the dad who means well but is completely out of his depth and therefore only causes chaos. And newcomer Harriet Herbig-Matten is convincing all along the line as the pubescent. The production always works particularly well when the humour arises from the everyday pitfalls of puberty. The closer the whole thing is to life, the funnier the film.

But unfortunately the script does not rely exclusively on such moments, but packs a lot of completely exaggerated slapstick with it. This is still quite amusing in places, but often it's just too chaotic and flat. That's a pity, because a lot of good potential is wasted here. Luckily, there are enough well-done scenes, so that the overall impression is quite balanced in the end. And since the moments that work well will speak directly from the heart of many viewers - whether they're struggling with a pubescent themselves or are in the midst of puberty - there are enough good laughs to give this comedy a satisfyingly watchable rating.

Cinema trailer for the movie "The Pubes - The Movie (Deutschland 2017)"
Loading the player ...