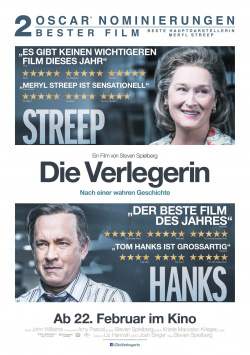 1971: Katharine Kay Graham (Meryl Streep) is under a lot of pressure. Not only is she having a tremendously difficult time as the first female newspaper publisher in the U.S. in a world dominated by men. On top of that, her Washington Post is about to go public. There can be no scandals or turbulence now. But in this situation, of all things, editor-in-chief Ben Bradlee (Tom Hanks) wants to report on an alleged White House cover-up scandal that seems to involve no less than four presidents. The whole thing sets off a fight for press freedom that makes waves across the country. Kay must now decide whether to risk the financial future of her publishing company and stand up to the U.S. government - a decision that will make history.

The publication of the so-called Pentagon Papers was one of the biggest political scandals in the US, along with the Watergate affair that emerged only a short time later. Steven Spielberg has given a gripping account of the events in his latest film, The Publisher. But even though his drama really only traces the events of the early seventies, the film has not become a political history lesson, but an extremely topical film about freedom of the press and about the importance of journalistic investigation. In times when reporters are under enormous pressure to get a story out as quickly as possible, what is shown here seems almost unimaginable. And the really important things that newspapers achieved in their day are now in danger of being completely destroyed by terms like Fake News.

And that's exactly why Spielberg's film is so timely. He shows how important it is to expose wrongdoing by governments and also hold them accountable for it. Now this all sounds like a lot of morality, doctrinaire, dry and served with a raised forefinger. Not at all! Spielberg wouldn't be Spielberg if he didn't manage to work up such a material in a rousing, clever and very entertaining way. Yes, actually there is only talking the whole time. You won't find anything like action here. But the dialogues are not only very well written, but also brought to life by a phenomenal cast. That Meryl Streep and Tom Hanks are great doesn't really need to be mentioned. But their interplay adds a very special touch that ensures that the scenes with Kay and Ben in particular are a feast for all lovers of great American acting cinema.

In addition, Spielberg again proves masterful at directing inherently simple dialogue scenes into something quite special. Every movement, every camera pan, every cut is perfectly thought out and part of a masterfully put together whole. It doesn't take aliens or dinos to leave the viewer in awe. The Publisher is a must-see for anyone who appreciates sophisticated Hollywood entertainment cinema. A rousing declaration of love to a perhaps bygone era of journalism, but at the same time a red-hot appeal for freedom of the press. Great acting and, as usual, great direction by Steven Spielberg, there is only one conclusion: absolutely worth seeing!

And another tip: The closing sequence is the perfect segue to the classic The Untouchables, which you should definitely watch again after seeing the movie.

Cinema trailer for the movie "The Publisher (USA 2017)"
Loading the player ...