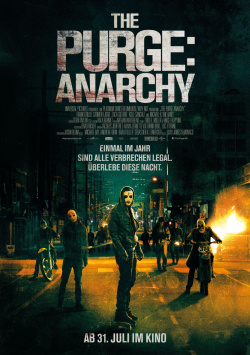 It's Purge Night Again. A few years ago, the new founding fathers of once-bankrupt America decreed that there would be one night a year when all crimes - whether robbery, rape or murder - could be committed with impunity. Emergency calls will not be answered, police stations and hospitals will remain closed. For 12 hours, people have the opportunity to vent all their anger and aggression without being legally prosecuted. Those who can, barricade themselves in their house or apartment that night. Those who lack the wherewithal for a security system, or who can't make it home before the purge begins, are helpless against the bloodthirsty mob.

But there are also people who want to use these 12 hours to settle unpaid scores. Police officer Leo (Frank Grillo) is one of those people. He wants to use Purge night this year to atone for the death of his son. But when, on his way to kill the man he wants to kill, he observes single mother Eva (Carmen Ejogo) and her daughter Cali (Zo&euml; Soul) being attacked by uniformed strangers, he cannot stand idly by. He saves the lives of the two women and then actually wants to continue his revenge plan. But when he returns to his armored car, the couple Shane (Zach Gilford) and Liz (Kiele Sanchez), who broke down shortly before with their car in the middle of the city, has hidden there. Now, lone wolf Leo must first get his four new companions to safety before he can finally exact revenge. But whether this will actually happen is more than questionable due to the ever-growing number of pursuers they have to shake off. Because twelve hours of Purge night can be pretty damn long.

Director James DeMonaco has actually done everything right with The Purge: Anarchy. Because instead of retelling the same story as the first film, he uses the interesting basic idea to tell a completely different, bigger story. Instead of one family the threat hits several protagonists this time and instead of just one house they have to fight their way through the whole city. Thus, the initial situation was consistently developed further and thus a lot of new suspense potential was established. And actually, part 2 works much better than its predecessor in many scenes. If it was shown there that even the wealthy people in the suburbs with their expensive security systems can not really protect themselves, The Purge: Anarchy shows the dangers for ordinary people who are almost completely defenseless in a big city at the mercy of the angry and murdering mob.

DeMonaco succeeds very well, especially in the first third, to build a threatening and oppressive atmosphere, which in its best moments reminiscent of early John Carpenter. However, as in Part 1, he fails to exploit the potential of his provocative idea consistently enough. Again and again he reveals some really promising ideas, where the socio-satirical traits of the Purge idea would be well recognizable. But in order to bring them out adequately, the production would have had to be much more biting and evil. But DeMonaco always slows himself down, then takes the whole thing way too seriously and gets lost in too conventional genre clichés too often. Although his characters in the second film do not behave quite as stupidly as some of the characters from Part 1, one would have liked in many a scene that the script moves a little further away from the behavior of the protagonists usual for the horror genre.

The Purge: Anarchy is better than Part 1, in some scenes very exciting and towards the end even a little bit evil. But the quite big hit is also this sequel not yet, even if the direction is right. The good basic atmosphere, the interesting initial idea and some very effective moments of suspense are at least enough to give the whole thing a satisfactory rating. Then until the next Purge night - because it will come for sure