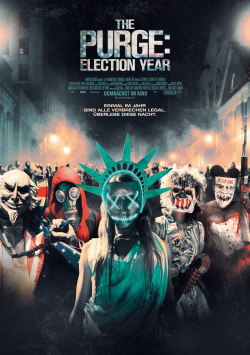 It's that time again: the annual Purge night is upon us. Once again, crimes of all kinds are allowed to be committed for twelve hours, with the perpetrators going completely unpunished - even murder. But if presidential candidate Charlie Roan (Elizabeth Mitchell) has her way, this should be the last Purge night. Because she wants to abolish the cruel ritual, which has cost her entire family their lives, at any cost. This puts her in the sights of the high-ranking initiators of Purge Night. They do everything to ensure that the dedicated senator does not survive this night. Leo Barnes (Frank Grillo), who two years ago fought with a motley crew for survival at the Purge night, tries to prevent this, after he had rejected a long-cherished revenge plan. But the enemy he's up against now is not only top-notch, but also armed to the teeth. The battle to end the Purge has begun.

The Purge: Election Year is now the third installment in the dystopian thriller series that began in 2013 with a home-invasion shocker and continued in 2014 with a merciless chase through a major city dominated by bloody anarchy. The financial success of the two films made a third installment inevitable. Again, the makers have tried to package the same basic idea in a slightly different way. This time the whole thing goes in the direction of a political thriller, which is dominated by quite bloody action only towards the end. This is quite thrilling in places, but also has to deal with quite a few logic holes. But one thing can be said for sure: If you liked the second part, you will also like part 3.

For not only that the film - unlike that was the case with the first and second part - can be considered a direct sequel to The Purge: Anarchy and is stylistically strongly oriented to its predecessor. The film is also noticeably superior to the second part in terms of tension and action. At some points the thriller is even really good, so that one would like to forgive it some extremely thin dialogues and almost silly plot elements too readily. But unfortunately, the positive aspects are not strong enough to compensate for all the weaknesses.

So then The Purge: Election Year is solid genre entertainment, but just not more. The basic idea still works and provides an oppressive atmosphere, from which the series still lives in the third attempt. But again, it shows that a good idea isn't enough to hide weak scripts. But since the quality doesn't go down, but rather up, and there is a target audience that seems to be willing to overlook the weaknesses, part 3 is once again: well worth seeing! Let's just hope that a possible fourth film will not only bring a new Purge variation, but also a better script. The potential is definitely there!

Cinema trailer for the movie "The Purge: Election Year (USA 2016)"
Loading the player ...