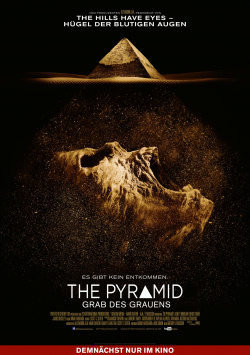 The Pyramid - Tomb of Horror

Young archaeologist Dr. Nora Holden (Ashley Hinshaw) and her father Miles (Denis O`Hare) have made a groundbreaking discovery in the desert of Egypt: using satellite imagery, they have discovered a unique, three-sided pyramid hidden deep in the desert sands for over 5000 years. Together with reporter Sunni Marshe (Christa Nicola), cameraman Fitzie (James Buckley) and robotics expert Michael (Amir Kamyab), they now set out to explore this discovery as quickly as possible. But when riots break out in nearby Cairo, the military forces Nora and her father to abort the expedition and evacuate the site immediately. But of course the explorers won't just accept that. They take advantage of the general excitement to venture inside the pyramid without escorts. But it is not long before they bitterly regret this decision. For inside this tomb, they are not alone...

The Pyramid - Tomb of Horror is the directorial debut of Grégory Levasseur, who previously worked as a writer on numerous films by horror genius Alexandre Aja (The Hills Have Eyes, Mirrors). Levasseur undoubtedly made a particular impression with his script for High Tension, which featured inventive twists and turns and tremendous atmospheric intensity. Given that, perhaps he would have been better off writing the screenplay for his directorial debut himself. Because what he had at his disposal here as a template is average at best without any surprise effect. The fact that the production starts in a very worn out found footage style, but then doesn't even follow through with it, further dulls the pleasure of this mummy horror.

Though the film does have its good and effective moments. Once you've fought your way through the somewhat plodding beginning, which plays a bit too much with the usual found footage elements, the first few minutes inside the pyramid actually create something like suspense. The claustrophobic atmosphere and some skillfully placed moments of terror comfort over the rather wooden acting of the actors and the many clichés. Now, if Levasseur had primarily focused on classic horror here, the archaeologist horror could have definitely worked. A hopeless situation, narrow, oppressive corridors and, of course, deadly traps offer enough potential for this.

But unfortunately, in the last third, unconvincing CGI effects are increasingly used, which deprive the story of any existing creepiness. By the finale, Levasseur then not only loses sight of the atmosphere, but also completely loses sight of the already thin story. Although things get a bit heftier here, there probably won't be any true genre fans who really feel anything like thrilling suspense here. What started off quite neatly now just seems dull and occasionally unintentionally funny.

Sure, The Pyramid - Tomb of Horror is far from the worst representative of its subject. The film has too many good - or should we say decent - moments to offer for that. But the mistaken belief in the minds of too many filmmakers and producers that they can create real scares with CGI monsters destroys any good potential the flick might have had. The weak script further underpins this impression. If you can overlook the last 20 minutes, you get some decent genre fare. Not more, but also not less. This is then unfortunately only enough for a: worth seeing conditionally!