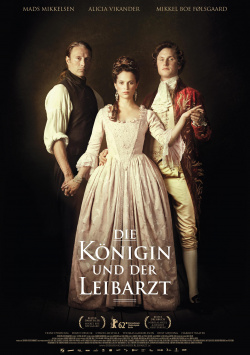 The Queen and the Personal Physician

At just 15 years old, Caroline Mathilde (Alicia Vikander), sister of the Prince of Wales, was married in 1766 to her cousin Christian VII to cement the bond between the English and Danish kingdoms. (Mikkel Følsgaard), the future Danish-Norwegian king. Fourteen months later, the heir to the throne, Frederick, was born. But the young queen was trapped in an extremely unhappy marriage. For Christian, who was diagnosed with signs of mental illness at an early age, showed his wife no love, affection or respect and rarely spent time near her. When he returns from a trip to Europe in 1769, he is accompanied by Johann Friedrich Struensee (Mads Mikkelsen), who serves as the king's personal physician. But Struensee not only has Christian's trust, he soon develops a deep friendship with the queen as well. And while the increasingly unstable ChristianVII. increasingly delegates affairs of state to him, giving him political power that allows Struensee to turn his Enlightenment visions into reality, his friendship with Caroline Mathilde grows into an intimate love that culminates in a passionate affair...

The story told by The Queen and the Personal Physician belongs to one of the most important periods in the history of Denmark and is undoubtedly one of the most emotional material that has been taken up again and again in non-fiction books and novels. Most recently, for example, author Per Olov Enqvist enjoyed great success with his version of the story told in the bestseller The Visit of the Personal Physician. Filmmaker Nikolay Arcel, who was responsible for the screenplay of the Stieg Larsson film, has now turned the historical events into great cinema, with opulent sets, atmospheric backdrops and great actors. Despite its stately running time of over two hours, there is hardly a moment that could be described as unnecessary length.

The drama was shot in Denmark, the Czech Republic and Germany, with Dresden in particular providing a perfect backdrop for the moving story. To keep the complex historical events and political context from being too dry, but gripping and entertaining, yet authentic, Arcel secured support from screenwriter Rasmus Heisterberg, with whom he had previously worked on Verblendung, and Lars von Trier. This collaboration has resulted in a great script that didn't win the Best Screenplay award at the Berlinale for nothing.

Besides the engaging locations, story, Gabriel Yared's enchanting score and superb set, it's of course the actors who ultimately bring it all to life. In addition to the as always commanding Mads Mikkelsen and Alicia Vikander, acting somewhere between fragilely delicate and resolutely strong, Mikkel Følsgaard is particularly captivating as King Christian VII, who is scarred by his mental illness. This character could have easily degenerated into a joke. But even though Følsgaard provides some humorous moments, his king is a rather tragic figure whose slow decline the audience follows at times with total distaste, at other times with great pity.

The Queen and the Personal Physician is more, than just another historical epic, more, than just a romantic drama. Although the sets and costumes clearly set the story in the 18th century, the whole thing feels surprisingly contemporary and is all the more captivating because of it. It's a great film that has already had great success at the box office in Denmark. Let's hope that it will also succeed in Germany. The Queen and the Personal Physician deserves it. Absolutely recommendable

Cinema trailer for the movie "The Queen and the Personal Physician (Dänemark/Deutschland 2012)"
Loading the player ...