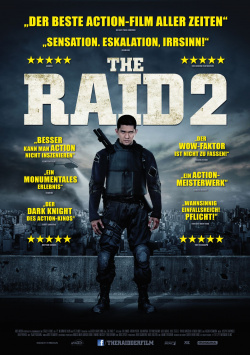 2012 Welshman Gareth Evans created one of the most uncompromising, hard-hitting and innovative action thrillers of recent years with The Raid. When it was announced that Evans would be directing a sequel to the surprise success, it was fair to wonder how he would top the quality of action scenes and tension of the first instalment. Now, with The Raid 2, Evans provides the impressive answer to that question. The film picks up right where The Raid left off: After a bloody operation against one of Jakarta's most powerful crime cartels, young police officer Rama (Iko Uwais) is one of the few survivors. When his brother Andi, who had worked for the gangsters, is executed by his own men, Rama seeks revenge. He is persuaded to go undercover to bring down the dense web of violence and corruption in the city. To gain the trust of mob boss Bangun (Tio Pakusadewo), Rama must become part of the gang of Bangun's imprisoned son Uco (Arifin Putra). Equipped with a new identity, the policeman gets himself sent to prison for three years as Yuda. It's the beginning of a protracted, extremely dangerous operation that will require Rama not only to completely forgo contact with his wife and young son, but also to use his full skills as a fighter. A lot of blood will be shed, and Rama does everything he can to make sure it's not his.

With The Raid 2, Gareth Evans actually does everything right. For one thing, he offers fans more of what they loved about the first installment, with some of the fight sequences being much more spectacularly and relentlessly realized. On the other hand, it completely breaks away from the concept of the predecessor, so that this sequel doesn't feel like a lukewarm rehash. So Rama doesn't have to fight his way through a skyscraper again. Instead, this time the campaign against organized crime takes place in prison, in a car, on the street, in the subway or even in the kitchen of a luxury restaurant. The dramaturgy has also been consistently developed further. If The Raid was actually a pure action film, in which the story played a rather subordinate role, the sequel grows into a complex gangster epic, which has much more to offer than just non-stop slashing action.

Both on the plot level, as well as in terms of action, suspense and fight choreography, The Raid 2 is first-class implemented. The fact that the film is considered by many to be one of the best action films of recent years comes as little surprise. What makes the movie so outstanding is the fact that Gareth Evans doesn't compromise. He doesn't even think about soft-pedaling his film for the affluent teenage audience. His production is uncompromising, hard, very complex and a real challenge for all senses. And this time it's no longer just men fighting each other. With Julie Estelle, the cast has been expanded - pardon the pun - by a real hammer chick, who is then also responsible for one of the most intense fight sequences of the last act.

Although The Raid 2 is with 150 minutes almost an hour longer than its predecessor, the story covers a period of several years and the mesh of the various criminal organizations and corrupt cops is quite complex, the film does not seem even a minute too long - or even boring. Here it pays off that Evans, unlike in the first part, does not just rely on a string of fight sequences, but also takes time to build up a plot construct that is perfectly suited to be continued in a possible third part.

However, the action is of course the focus of the film. And this is at times really painfully brutal staged. The fact that the film is uncut in German cinemas is really a small miracle in view of some scenes. Tender-hearted viewers and all those for whom Part 1 was already too hard, may already reach their limits after a few minutes. But if you finally want to see some handmade, uncompromising and dirty action and a first-class gangster thriller, you shouldn't miss this masterpiece. Absolutely worth seeing