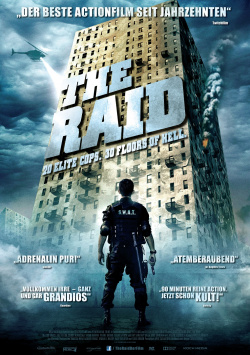 That he is not facing a routine mission, Rama (Iko Uwais), newest member of a special task force), already realizes when he stands in front of the fifteen-story apartment block. It is from here that the brutal drug lord Tama (Ray Sahepaty) reigns supreme, and this undercover operation is designed to take him down. But as well-trained as the twenty elite cops may be, they only stand a chance against Tama's henchmen if their surprise attack works. And on the first few floors, the plan seems to be working. Many of the criminals residing here can be taken out before they can sound the alarm. But after a brief period of success, all hell breaks loose in the high-rise. With extreme violence and unexpected strength, Tama's killers take up the fight and decimate the task force in no time, so that soon only a few cops are left. Rama is clear: victory is out of the question, now it is only a matter of surviving a retreat. And so he must take charge of the small force to bring the mission to a successful conclusion after all. But Tama hasn't even brought out his heaviest guns yet...

When Welsh director Gareth Evans travelled to Indonesia in 2007 to make a documentary about the martial art of pencak silat, he noticed student fighter Iko Uwais during his shoot, and Evans was determined to make a real martial arts film with him. In 2009, the two then made the film Mertantau together, which played quite successfully at a number of film festivals and laid the groundwork for the two men to work together again. This is now available in the form of The Raid, a martial arts action thriller that not only celebrates the high art of pencak silat, but also lets various martial arts collide and talk next to fists and legs also quite hard guns.

Inspired by films such as John Carpenter's Assault - Attack by Night or the first part of Die Hard Evans wanted to create tension in an isolated space. The elaborately choreographed fight sequences were shot in an old 1950s building, with selected scenes of entire floors being reduced to rubble staged in recreated sets. And what has then been captured on location is literally non-stop action that barely gives the viewer time to catch their breath, while still boasting some of the best, as well as the toughest, fight scenes of recent years.

The plot is an absolute secondary consideration. Themes like corruption, brotherly strife, honor, betrayal are touched upon, but there isn't much time to expand on these aspects. Because there is hardly a minute in which there is no shooting or other kind of fighting. The whole thing happens at an extremely fast pace, so that the viewer is already completely exhausted after a few minutes. Some sequences, like the big fight between Rama and Tama's best man Mad Dog, drag on a bit too long, though, which causes a kind of dullness to set in with the viewer, which then takes away some of the effectiveness of the whole thing.

Who grew up with the action movies of the 70s and especially the 80s and learned to appreciate them, will recognize in The Raid a return to the dirty, relentless and politically completely incorrect action, which was especially in the 80s a thorn in the eye of many guardians of morality, but which is completely missing from the for the most part far too slick and overproduced genre films of recent years. And even if Gareth Evans runs the risk of presenting a kind of overkill here that you quickly get tired of, his relentless, extremely brutal and excellently choreographed and directed thriller is a long overdue breath of fresh air in the action genre that fans of the somewhat harder pace should not miss. But: please don't copy it, otherwise you'll get a nasty ouch! Worth seeing

Cinema trailer for the movie "The Raid (Indonesien/USA 2011)"
Loading the player ...