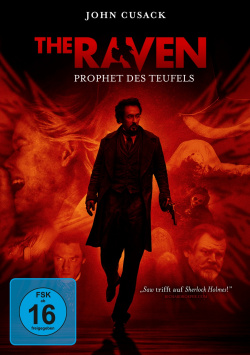 The Raven - Prophet of the Devil

Film: Baltimore in 1849: Writer Edgar Allan Poe (John Cusack) is a broken man. Great literary successes are missing, alcohol excesses and debts determine the everyday life of the man broken after the death of his wife. Only the newly ignited love for the beautiful Emily (Alice Eve) gives the poet new hope. But then a new shadow settles over Poe's life. A bestial killer causes fear and terror in the city. Since he carries out his murders exactly as Poe described them in his stories, he quickly comes under suspicion himself. But the investigating detective Emmet Fields (Luke Evans) does not believe in Poe's guilt and convinces the writer to help him solve the case. But the search for the killer takes on very personal proportions for Poe when Emily is kidnapped and there is little time to save her life...

The Raven makes use of an interesting premise, as the thriller highlights the final days of Poe's life, about which there is much conjecture and legend but virtually no fact. Quotations and allusions from Poe's works are repeatedly woven into the fictional crime story, which underpins the good idea of the story and supports the pleasantly dark atmosphere of the production. James McTeigue (V for Vendetta) shows once again that he is more a visual director than a good storyteller. The set design and the occasionally astonishingly gory effects are top-notch and do a better job of keeping the viewer hooked than the actual plot.

The problem with the story isn't that it's bad or unimaginative. On the contrary. In itself, the hunt for the serial killer is very exciting and has high thrill potential. A murderous pendulum, a woman buried alive, a mysterious killer playing a cat-and-mouse game with a brilliant writer - all these are actually ingredients for the best mystery thriller entertainment. But unfortunately, the script suffers from uninspired dialogues and a rather one-dimensional character drawing, which also leads to a lot of tension being lost. Moreover, the poor dialogues also have an effect on the acting of the actors, who I think are very good. Even the usually reliable John Cusack acts a little wooden, which reduces the fun factor of the dark goings-on a little.

But even if McTeigue can not exploit the dramaturgical potential of the film, so The Raven has become, on balance, an absolutely worth seeing thriller. In the end, the engaging visuals and the good basic idea are enough to console over the weaknesses of the production. If you're hoping for a Poe biopic or a true-to-the-works literary adaptation, you're completely wrong here. But if you are just looking for thrilling entertainment with high show values and like it a bit bloodier, you should not miss this insight into the last days of Edgar Allan Poe. Worth seeing!

Picture + Sound: The technical implementation of the DVD is on a good to very good level. The picture is clean, has a decent image sharpness, which despite good black levels and coherent contrast in the numerous dark sequences must accept slight losses in quality. The colour scheme is very atmospheric, and there are no detectable smudges or distracting effects. The Dolby Digital 5.1 sound has some very good surround effects to offer, which provide good dynamics and a coherent atmosphere, especially during the murder scenes or on the streets of Baltimore. But even the quieter moments can convince with powerfully mixed dialogue and the well-matched soundtrack. Good!

Extras: The DVD has just under 40 minutes of bonus material to offer. It starts with a short Making of (approx. 13 min.), followed by a short documentary about Edgar Allan Poe (approx. 10 min.), which is however much too scarce, in order to be able to go really into the depth. There is also a short promotional featurette (approx. 2 mins), a conversation between John Cusack and James McTeigue (approx. 3 mins), and six cut and extended scenes (approx. 10 mins). The trailer for the film and other program tips round out the decent additional offerings.

Conclusion: The Raven is a gritty thriller with some surprisingly bloody interludes, which is overall more visually, rather than dramaturgically convincing. Equipment and effects are more than successful, the dialogues, on the other hand, sometimes seem a bit wooden, against which even good actors like John Cusack or Brendan Gleeson can do little. Nevertheless: who likes films like From Hell and can overlook content deficiencies with engaging visuals, this technically well implemented and decently equipped DVD can be thoroughly recommended!