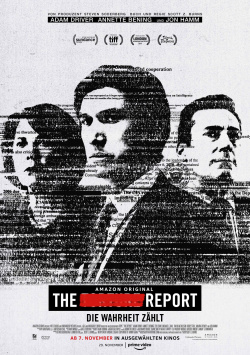 How far can intelligence agencies go to get people suspected of being terrorists to talk? To what extent does the end justify all means? And is the CIA, most powerful intelligence agency in the U.S., trying to sweep information about extreme interrogation techniques under the rug? Young Senate staffer Daniel Jones (Adam Driver) is assigned by his superior, Senator Dianne Feinstein (Annette Bening), to lead an internal investigation into the CIA's so-called Detention and Interrogation Program. Over the course of years, Jones gathers evidence and information. His final report not only the CIA, but also the White House wants to keep under wraps. So the battle for the truth is not over.

The Report by Scott Z Burns is a political thriller based on actual events that asks a very important moral question: How far can a government go to solve or prevent a terrorist attack? One is now inclined to say: of course, whatever it takes. But this is too simple, as the film impressively shows. For what if an innocent person is tortured in a truly inhumane way? What if even the most extreme means do not lead to the desired success or perhaps even stand in the way of promising investigations? And isn't it always the case that violence begets counter-violence?

It's really not an easy subject that this film illuminates with a somewhat convoluted narrative. The ensemble that Burns has assembled in front of the camera here is really top notch and makes this film quite great acting cinema. However, there is one point that doesn't quite want to work: on the one hand, the production is very restrained, consisting of long dialogue sequences and a rather matter-of-fact approach to the subject matter. On the other hand, there are always long scenes of torture that make you sick to your stomach. What Burns wants to achieve with this is already obvious after the first sequence, there really wouldn't have been any need for the further clips.

The Report seems a bit unbalanced overall, but the great actors and the important questions the film raises easily make up for that. It's really worth overlooking the few flaws here, as the drama's subject matter is unfortunately still very, very relevant. A film to root for and to think about - and for that it deservedly gets a: worth seeing!

Note: Following its theatrical release, The Report will also be available to watch on Amazon Prime Video from the end of November.