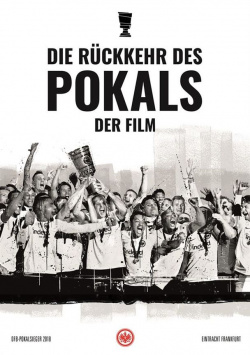 The Return of the Cup - The Movie

That was quite a cinematic event, though, when the Eintracht Frankfurt players brought the DFB Pokal back to Frankfurt in May 2018. Thousands of fans cheered along the route from the airport to Römerberg, where a whole sea of other fans waited to celebrate the victory together. This event has now given rise to The Return of the Cup - The Film, which in 89 minutes impressively reveals the inner workings surrounding the DFB Cup victory from May 2018.

The rousing documentary offers fans exclusive insights into the inner workings of the team before, during and after the final, as well as interviews in which protagonists talk about this historic weekend. It's not only interesting, but also emotionally stirring. There are also images of Rebic's inimitable goals and Gacinovic's unforgettable solo run, accompanied by the original commentary, which is guaranteed to give many fans goose bumps once again.

Produced by media tools business communication GmbH in cooperation with Warner Bros. International Television Production Deutschland GmbH. The whole thing came about because a film team was allowed to accompany the team from their departure on Thursday to the end of the celebrations on the Römer on Sunday around the DFB Cup weekend. Once it was clear that this historic victory was to be documented for a film, interviews were conducted with coaches, players and officials afterwards. The result is a film that impressively shows the inner workings of Eintracht and conveys the dedication and passion with which everyone involved worked for a successful final. For fans, it's a truly great look behind the scenes and a stirring reminder of a truly special day! Above all, those who were there themselves will find The Return of the Cup - The Movie a truly special piece of work.

So, go to the cinema and relive this sporting event, where not only a city, but a whole region was cheering along! Not only for Eintracht fans an absolute must!

Cinema trailer for the movie "The Return of the Cup - The Movie (Deutschland 2018)"
Loading the player ...