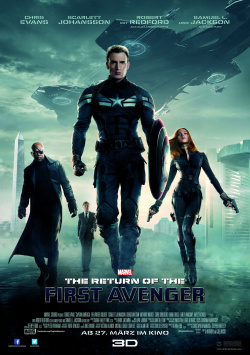 The Return of the First Avenger

After saving New York from an alien invasion together, the Avengers must now go their own way again for the time being. After Iron Man and Thor, Captain America (Chris Evans) now gets to embark on his next solo adventure. In The Return of the First Avenger, Steve Rogers is slow to find his feet in a modern world that is still completely unfamiliar to him after the events of New York. While he works alongside Natasha Romanoff aka Black Widow (Scarlett Johansson) on one secret operation after another on behalf of S.H.I.E.L.D., he also tries to learn as much as he can about the time he missed trapped in the ice. But he doesn't have much time for that. For he soon finds himself at the center of a vast conspiracy that has its starting point in the midst of S.H.I.E.L.D., of all things. And in addition to his own life, Captain America must soon save that of many millions, and in the process comes up against a seemingly superior foe: the Winter Soldier.

After aliens in the Avengers, different worlds in Thor, and fighters with superhuman powers in Iron Man 3, The Return of the First Avenger comes across as almost realistic. While there are some distinct fantasy elements here as well, the threat that Captain America must combat with his allies is much more rooted in reality than the foes of his fellow Avengers. Brothers Anthony and Joe Russo, who have so far primarily directed award-winning comedy series like Community or Arrested Development, deliver a fast-paced spectacle with their first foray into superhero cinema that almost feels like a throwback to the political thriller of the '70s, spiced up with modern Bourne-style action sequences. The almost 170 million dollars they were allowed to spend are definitely visible in the final result. Because the CGI effects, which were produced by almost a dozen companies on several continents, are sometimes really breathtakingly good.

Especially in the last third there is almost an effects overkill, when the story is also action-wise at its best. The fact that the film also has some really good actors to offer absolutely becomes a minor issue here. Fortunately, there are plenty of opportunities for the actors to breathe some life into their characters in the nearly 100 minutes leading up to the grand finale. While Chris Evans, Samuel L. Jackson and Scarlett Johansson have already been able to do important groundwork in previous Marvel films, Anthony Mackie in particular stands out positively among the newcomers as Captain America's new sidekick. His character of Sam Wilson aka Falcon is extremely cool and a real asset to the Avenger ensemble. But also Oscar winner Robert Redford delivers a very coherent performance as the shady Alexander Pierce.

Besides the many successful aspects, The Return of the First Avenger also has to deal with some problems that you as a viewer should be prepared for in order to adjust your expectations accordingly. Probably the most obvious problem is that Captain America's second film is almost completely devoid of humor, unlike nearly every previous entry in Marvel's Avenger universe. True, there are a few very successful laughs. But there is little of the fun factor of the Iron Man films or the first Avengers film together here. This has its advantages, as this seriousness does justice to the core of the story. But from a Marvel movie you expect a lot of fun, which is why some fans might be disappointed by its absence.

The second problem are the in principle really great staged action scenes. Especially the numerous duels are first-class choreographed. However, the very unsteady camera work comes across as very tiring, especially in the darker moments. If you're not a fan of the Bourne shaky cam, some scenes here might make you resentful. Whether these two points are real problems is certainly in the eye of the beholder. However, one should be aware of them before engaging in the duel between Captain America and the Winter Soldier. If you accept the lack of humor and the occasionally extreme shaky visuals, then there's nothing standing in the way of a really great popcorn treat.

Because what the creators really deserve credit for is not stopping dead in their tracks, but pushing not only the story, but the characters as well in this Phase 2 that the Avenger universe is currently in. Steve Rogers is no longer the Captain America he was in the first film and this adventure will also leave its mark on his personality for very personal reasons. And that's what makes this movie so exciting for fans again. Even if the big wow effect is missing and it becomes clear again that Captain America is not necessarily the most interesting superhero from the Marvel universe, there are more than enough good reasons that make The Return of the First Avenger an absolutely successful, entertaining spectacle with extremely high show and entertainment value. And for that, of course, there is a very clear: Absolutely worth seeing!

Cinema trailer for the movie "The Return of the First Avenger (USA 2014)"
Loading the player ...