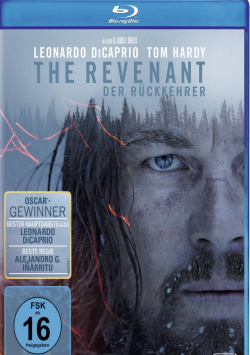 Movie: North America in 1823: Experienced trapper Hugh Glass (Leonardo DiCaprio) is tasked with bringing a group of hunters and soldiers led by Captain Andrew Henry (Domhnall Gleeson) safely through Arikara Indian territory to their next base. But after an attack by the Arikara, many of Henry's men are dead and much of the captured hides are lost. Tempers flare among the few survivors. John Fitzgerald (Tom Hardy), in particular, is not too fond of Glass and his son Hawk (Forrest Goodluck) and just wants to get himself and his loot to safety as quickly as possible. But the group is delayed again when Glass is attacked and badly injured by a grizzly bear. Along with young Jim Bridger (Will Poulter) and Hawk, Fitzgerald agrees to stay with the injured Glass until he is either fit for transport or dead. But then events start to spiral: Fitzgerald wants to put Glass out of his misery, but is surprised by Hawk, whom he kills in front of his father. Fitzgerald then convinces his young companion to bury Glass, who is more dead than alive, and follow the others to the base. However, Glass does not die. He manages to free himself from his safe grave and finds new strength in the one thought that drives him from then on: he will avenge the death of his beloved son, no matter the cost.

That Leonardo DiCaprio is a first-class actor should now be understood by the last critic. Long ago, the previously often underrated DiCaprio would have deserved an Oscar, whether for Wolf of Wall Street, Django Unchained or for Shutter Island. But so far he has been denied this last honor. That it has now worked with The Revenant - The Returnee, so it was actually almost a matter of course. However, a deserved one, because what DiCaprio in the new film from Birdman director Alejandro G. I&ntilde;&aacute;rritu delivers is hard to beat for intensity and power. For long stretches, he does without dialogue and relies entirely on his body language and facial expressions. He does this so brilliantly that you're willing to throw Oscars at the TV.

But the film doesn't just thrive on the excellent acting of DiCaprio and his co-stars, such as a Tom Hardy you can hate with all your heart as an audience member or a very commanding Domhnall Gleeson. The mix of survival drama and revenge thriller is also another testament to the skill and versatility of director Alejandro G. I&ntilde;&aacute;rritu. It's absolutely fascinating how he manages to tell what is actually a very simple story in an incredibly gripping, emotional and visually stunning way. With the help of cinematographer Emmanuel Chivo Lubekzi, the rugged landscape on location in Canada and Argentina was captured in wonderful images that simply have to be experienced on the big screen. Through his very special directing style, I&ntilde;&aacute;rritu makes its audience truly feel the hardships Captain Henry's men had to endure.

The quality of everyone's skill becomes truly apparent during the relentlessly realistic bear attack. It may not be the most gruesome images in the film, but it is certainly the one that will be most deeply etched in the viewer's memory. The perfect interplay of DiCaprio's physical abandon, perfectly executed effects, stirring camerawork, and atmospherically dense direction make this sequence an extremely intense viewing experience. This is true of other scenes in the film as well, though no longer with the same power as is the case with this sheerly futile duel.

The Revenant - The Returnee is truly not a perfect film. For that, I&ntilde;&aacute;rritu simply gets lost too often in its slow narrative flow and mesmerizing imagery. But even if some scenes are a bit of a test of patience for the audience, this journey through the merciless wilderness of North America is overall great cinema - even in your own home. For this there is a very clear: Absolutely worth seeing!!!

Picture + Sound: The film's wonderful landscape shots also come into their own in the home cinema, with the picture having a pleasant depth overall. Colors are mixed in an atmospherically reduced manner, and overall sharpness is at a very high level. Even in darker scenes, the many small details come through very well. The audio is in a pleasantly dynamic DTS 5.1 mix that not only lets the voices ring out of the speakers with good clarity, but also provides plenty of movement in the surrounds with well-executed sound effects every now and then. Very Good!

Extras: Apart from a picture gallery, the only extras available are the documentary Departure into an Unknown World (approx. 44:04 min.). This is a very unusual, but extremely interesting and great filmed making of, which should not be missed by fans of the film.

Conclusion: The Revenant - The Returnee is a little tough and unwieldy in places. But the mesmerizing camerawork and intense acting, especially from Oscar winner Leonardo DiCaprio, still make this revenge tale a very special movie experience, presented on the Blu-ray in very good picture and sound quality. As a bonus, there is only one documentary, but it is at least very detailed and worth watching. Overall, there is for this disc a clear: Absolutely recommendable!