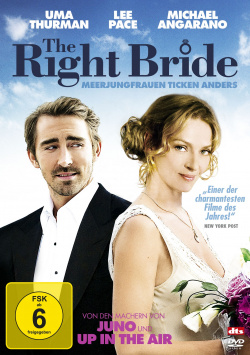 Film: When children's book author Sam Davis (Michael Angarano) invites his buddy Marshall (Reece Thompson) on a road trip together, Marshall is convinced that this trip should serve to consolidate their slightly broken friendship. But soon he has to realize that Sam has completely different motives and he wants to win back his ex-lover Zoe (Uma Thurman). It's just stupid that the much older woman is about to step in front of the altar with the globetrotter and documentary filmmaker Whit Coutell (Lee Pace). That's what Sam wants to prevent at any rate. And so he shows up with a very disappointed Marshall at a party in the beach house where Zoe wants to get married this weekend. And even though the future bride wants to get rid of her ex as soon as possible, her brother Teddy (Jake Johnson) and Whit invite the two wedding crasher to stay with them in the beach house and stay until the wedding. And so it's only a matter of time before this weekend degenerates into an emotional chaos...

Was Winkler also not quite without gags, whose level is somewhat lowered or kept simpler. But all in all he relies more on his story and the charm of his characters than on flat-headed scoundrels and stale corny jokes. He is supported to the best of his ability by the good ensemble of performers that he was able to win for his debut. Whether Lee Pace ("Pushing Daisies", "Der Hobbit"), Jake Johnson ("New Girl") or Rebecca Mader ("Lost"), here even small supporting roles are cast very well. The only drawback is that it doesn't really want to spark between the otherwise really convincing main actors Michael Angarano and Uma Thurman. Sure, it's made very understandable why Sam the older Zoe is totally addicted to. But why she also feels so attracted by the children's book author, who seems to be very youthful, is only partly believable.

However, in the end "The Right Bride - Meerjungfrauen ticken anders" is a romantic fairy tale, in which not all aspects have to be absolutely believable. Max Winkler has succeeded in creating a sympathetic romance that would only have been good for a little more bite. Because the movie seems a bit too harmless, which in the end leads to the fact that despite the good cast and the captivating atmosphere it doesn't stay in the movie's memory for long. The nice starting situation of the story could certainly have brought out a lot more. But if you consider again that the movie is a directing debut, this weak point can still be forgiven. Because even though "The Right Bride - Meerjungfrauen ticken anders" is not the big hit, the romantic comedy is definitely worth seeing for all fans of this subject!

Picture + Sound: The picture on the DVD is clean and radiates a very warm, engaging atmosphere thanks to its harmonious colouring. The good picture sharpness and the neatly coordinated contrasts also ensure an overall positive overall impression of the visual implementation. Romantic comedies generally don't belong to those movies that use a lot of sound effects. And so also here the dialogues and the music are clearly in the foreground, whereby a real surround feeling rarely comes up. Still, that's still fully enough for one: Good!

Extras: As a bonus the DVD has 2 minutes of edited scenes, short outtakes (approx. 2:35 min.) and an extended version of Teddy's wedding speech (approx. 2:33 min.). Besides there is a proper Making of (approx. 21 min.), as well as a featurette consisting of interviews and behind-the-scenes recordings about the director's work. A promo featurette (approx. 4:38 min.), some uncommented B-Roll shots (approx. 7 min.), as well as the short film by Whit (Lee Pace), which can be seen briefly in the film (approx. 4 min.) and the trailer are also still on the bonus menu. Gut!

Fazit: "The Right Bride - Meerjungfrauen ticken anders" is a charming little romantic comedy that can score with some nice snapshots and a sympathetic cast of actors. Even though the romantic sparks between Michael Angarano and the much older Uma Thurman don't really sparkle, the story as a whole doesn't seem unbelievable and somehow loveable. Even if the wheel isn't reinvented here and the whole thing is a little too good in the end, lovers of small American independent romances can confidently enjoy Max Winkler's well cast directorial debut. Recommended