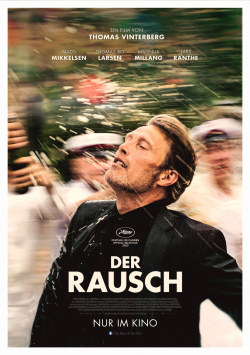 Boredom dominates the everyday life of Martin (Mads Mikkelsen). Once he was a teacher with passion, today his job only bores him. And also in his marriage the fire has long since gone out. But Martin is not alone. His three best friends, who teach at the same school, feel the same way. At a lively birthday party, the men discuss the theory of a Norwegian philosopher, according to which people have too low an alcohol content in their blood and are therefore unable to perform at their best. It is quickly decided: This theory must be tested in a self-experiment. The four now want to always keep a certain level during work - and this has unexpected consequences...

Following the haunting drama "The Hunt", the tragicomedy "The Frenzy" once again reunites the Danish dream team Thomas Vinterberg (director) and Mads Mikkelsen. To make a long story short: The film is great. It could have so easily gone wrong, given the premise. It's hard to even imagine what another director would have done with this material. But Vinterberg does an excellent job of believably portraying the various facets of alcohol consumption - both the intoxicatingly beautiful and the depressing ones that can absolutely destroy a person's life. "The Intoxication" could quite easily have been a flat comedy or a depressing drama. Neither is the case.

The humor is wonderful, while the dramatic scenes are extremely emotional. But over all, there is a very life-affirming spirit that makes this film so special. The fact that Vinterberg succeeded in doing this is a small feat, since he had to deal with the death of his daughter in an accident during filming, which almost meant the end of the film. But Vinterberg had to keep working in order not to be consumed by his grief. The result is a film about the various facets of a life that, despite its many dark sides, conveys a very clear positive message.

"The Intoxication" is not, however, an ode to alcohol. But the film is also not a constant moral warning with a raised forefinger. Greatly staged and excellently acted - a film that makes you think, but at the same time puts you in a real rush of happiness. And for that it more than deserves a: Absolutely worth seeing!!!

Cinema trailer for the movie "The Rush (Dänemark 2020)"
Loading the player ...