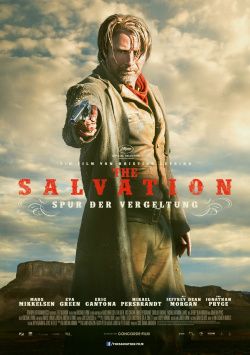 For seven years now, Dane Jon (Mads Mikkelsen) and his brother Peter (Mikael Persbrandt) have been in America to build a new life for themselves. With a heavy heart, Jon has had to leave his wife Marie (Nanna &Oslash;land Fabricius) and his son Kresten, only four years old, behind in the old country to do so in 1864. Now the time has finally come when he can embrace his loved ones again. But their happiness is not for long. On the way to their new home, Marie and Kersten are brutally murdered by outlaws. In his infinite grief Jon doesn't hesitate for long and kills the two killers. What he doesn't suspect is that one of the two was the brother of ruthless gang leader Delarue (Jeffrey Dean Morgan). Together with the mute widow (Eva Green) of the killed, Delarue now seeks revenge and wants the Dane dead. And since the entire town seems to fear the cruel man, Jon can only hope for his brother's help. But what good can two of them do against an entire gang of trigger-happy outlaws?

With The Salvation, director Kristian Levring has fulfilled a childhood dream. He had always dreamed of directing a classic western. And he has now fulfilled that dream with an international cast in South Africa. He tells a rather conventional story of the dream of a better life in the New World, which turns into a bloody nightmare. After barely twenty minutes the whole thing turns into a relentless revenge story, which however hardly has any real surprises to offer. The roles here are clearly distributed and especially Delarue is - Jeffrey Dean Morgan's great performance notwithstanding - a flat cliché of the typical Western creep.

Even in the quieter moments you can clearly tell that the film was not directed by an American but by a Dane. With extreme slowness and plenty of Nordic bleakness, Levring guides his hero through the gruesome ordeal that culminates in a lead-filled showdown. In this shootout, Levring has then also given free rein to his love of the Western genre. This is where the film really works well and offers top-notch western entertainment of the particularly ruthless kind. It's a bulky and somewhat tedious road to get there, though.

What the film does benefit from, however, even in its weaker moments, is the top-notch cast. Mads Mikkelsen is simply superb as the tormented, taciturn avenger, and Mikael Persbrandt also manages to make a lasting impression in his small but hugely important supporting role as Jon's brother. Jeffrey Dean Morgan, who likes to mimic the lovable sympathizer, as the ice-cold villain with his ruthless behavior really gives the audience goosebumps. And Eva Green is almost as convincing as a disfigured, mute killer widow as she was most recently as the murderous femme fatale in Sin City 2.

So in the end, The Salvation leaves a somewhat ambivalent overall impression. On the one hand, the Western is great filmed and excellently acted, on the other hand, it offers dramaturgically nothing new and suffers in many moments under its extremely unwieldy staging. So the film is really nothing for friends of light Wild West romance, but if you like dark revenge thrillers, you can definitely risk a look at this Danish western: Worth seeing with reservations!

Cinema trailer for the movie "The Salvation (Dänemark/Großbritannien/Südafrika 2014)"
Loading the player ...