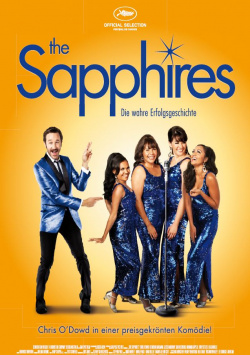 Sisters Gail (Deborah Mailman), Julie (Jessica Mauboy) and Cynthia (Miranda Tapsell) have dreamed since childhood of one day escaping their dreary daily lives in a small Aboriginal settlement. Their musical talent could open some doors for them. But in 1960s Australia, Aborigines face enormous discrimination and nothing but hostility outside their settlements. So it's no wonder that the sisters are completely ignored by the judges at a talent contest, even though they are by far the best singers. Only the Irish musician Dave Lovelace (Chris O`Dowd) recognizes the potential that lies dormant in the young women. He persuades them to hire him as their manager and to try their hand at interpreting soul music. This is the birth of The Sapphires, whose success no one really dares to believe in yet. But when the sisters are hired to use their music to bolster the morale of the troops in Vietnam, that could change very quickly.

The Australian music film The Sapphires is based on the play of the same name by Tony Briggs, who in it incorporated the true experiences of his mother and aunt into a fictional framework. Director Wayne Blair follows almost all the usual rules of the musical film in his adaptation of the play, so the viewer should not expect too many surprises here. That the film has been described by some American critics as an Australian version of Bill Condon's Dreamgirls is in many ways accurate, although Blair uses the music in a far less intrusive and musical-esque way than Condon did. In The Sapphires, the focus is on the characters and how they change in the face of success, war and racism.

This may not be particularly surprising, but it is extremely involving, amusing and moving. This is not only due to the catchy music, but primarily to the natural and convincing acting of the three main actresses. It is true that the three so different sisters and their conflicts among each other are drawn a bit clichéd. But Deborah Mailman, Jessica Mauboy and Miranda Tapsell fill these characters with life in such an engaging way that one gladly overlooks the fact that the script denies them the necessary depth. The three are supported by a no less convincing Shari Sebbens and a truly wonderful Chris O`Dowd (The IT Crowd), who plays the inherently utterly broken Dave Lovelace with infectious warmth and plenty of heart.

The Sapphires has been a huge success in its native Australia, but has so far failed to convince much overseas. It is also rather unlikely that the film will draw crowds to cinemas in Germany. In view of numerous blockbusters accompanied by big advertising and summer temperatures, it could even go down completely. But that would be a real shame, as the film tells its beautiful story in a very engaging way and its music ensures a lasting good mood. If you like the soul music of the 60s and 70s and appreciate well-acted musical films with a mix of drama, romance and a bit of humor, you should definitely give The Sapphires ladies a chance. Not only worth seeing, but also extremely worth hearing!

Cinema trailer for the movie "The Sapphires (Australien 2012)"
Loading the player ...