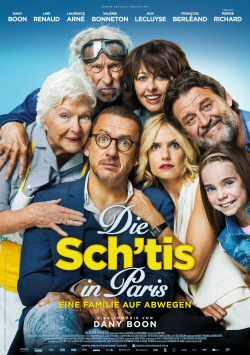 The Sch'tis in Paris - A family on a wrong track

Star Architect Valentin D. (Dany Boon) has reached the height of his success. Together with his partner Constance Brandt (Laurence Arné), he is preparing a major retrospective at the Museum für Moderne Kunst in Paris. High-calibre customers queue up at the couple and the press rushes for interviews. It would be fatal if Valentin's big secret came to light. For he is not, as he always pretends, an orphan, but actually he is a Sch`ti from simple circumstances. He could hide that from the outside world so far. But then his mother (Line Renaud), his brother (Guy Lecluyse) and his wife (Valérie Bonneton) show up in Paris for the exhibition opening. Just when it seems that the situation can't get any worse, Valentin gets involved in an accident that causes him to lose his memory - and suddenly he only speaks Sch'ti …

It's ten years since Dany Boon staged "Welcome to the Sch'tis", one of France's most successful films. Over 20 million Frenchmen and more than 2 million cinema-goers in Germany laughed heartily about the Sch'tis and its strange dialect. Now Boon returns to this world. However, "The Sch'tis in Paris - A family on the wrong track" is not a continuation of the cinema's success, but a completely new story. And unfortunately it is not half as funny as the first lesson in Sch`ti. The first movie played a lot with clichés and prejudices and created a very charming and adorable and odd world, in which you just felt comfortable as a viewer. The Sch`ti dialect was just one piece of a much larger, well-designed puzzle.

Now here the game with the clichés becomes a cliché and the dialect only means to an end. There is hardly anything left of the charm and kindness of the first movie. Yes, there are still some very amusing scenes. But in the end the whole thing is more reminiscent of the Flodder Proll family, so popular in the 80s, than of the Sch'tis that Dany Boon introduced to us ten years ago. Even Pierre Richard, one of the greats of French comedy cinema, can only make you smile and hardly make you laugh.

"The Sch'tis in Paris - A family on a wrong track" is not really bad, but too weak to even come close to fulfilling the expectations placed on a new "Sch'ti" film. The attempt to turn the omens around and bring the Sch'tis from the province to the big city may have sounded funny on paper, but in the very chaotic implementation it has unfortunately only become a shallow corny joke, which is quite funny from time to time, but without the subtle humor, the adorable characters and the charm of "Welcome to the Sch'tis" must get along. And unfortunately this only works to a very limited extent. Therefore, the bottom line is that there is only one: Worth seeing with large concessions!

Cinema trailer for the movie "The Sch'tis in Paris - A family on a wrong track (Frankreich 2017)"
Loading the player ...