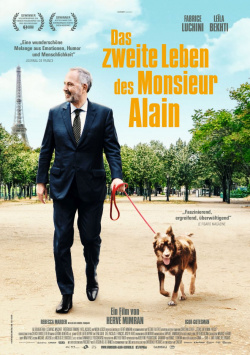 The Second Life of Monsieur Alain

Alain Wapler (Fabrice Luchini) lives for his work. He rushes from one appointment to the next, free time is a foreign word to him. He accepts the fact that he is completely estranged from his daughter, as well as the very unhealthy physical strain. One day he gets the receipt for it: A stroke brings him to his knees, speech and memory disorders make it almost impossible to continue. But Alain fights his way back into life with the help of the young speech therapist Jeanne (Le&iuml;la Bekhti). But his plan to both get back on top at work and spend more time with his daughter turns out to be harder than he thought.

The Second Life of Monsieur Alain is based on the autobiography of the former chairman of the board of carmaker Peugeot-Citro&euml;n, Christian Streiff, who was forced to completely change his life after suffering a stroke. Director Herv&eacute; Mimran has spun this true background into a quiet comedy that shines, especially with its wonderful lead actor Fabrice Luchini. The versatile mime manages to absolutely convincingly portray the transformation from undercooled workhorse to charming man who wants to live his newfound life a little more worth living than before. Although he wasn't exactly the most likeable person in the past, one wishes that he could not only live an independent life, but also that he could reconcile with his daughter.

Luchini is supported by a well-chosen ensemble. Le&iuml;la Bekhti as speech therapist Jeanne, in particular, quickly has the audience's sympathies on her side. The little subplot about a possible romance between her and Alain's nurse is very charmingly realized and just makes the audience happy. This actually also applies to the dramaturgy of the film, even if it seems a bit contrived, especially in the last act. The final conflict between Alain and his daughter is incredibly predictable and unfortunately also arguably unimaginative. Yet somehow it's hard to resent the film for such weaknesses.

Surely, a great masterpiece The Second Life of Monsieur Alain really isn't. The story is told too much along the same lines for that. But honestly, that's exactly why the film works so well. It's just nice and offers an entertaining escape from reality with nice feel-good moments. Some viewers might miss the depth, but those who just want to feel good and who like French entertainment cinema of the light kind will be well served here. That's exactly why it gets a more than deserved: Worth seeing!

Cinema trailer for the movie "The Second Life of Monsieur Alain (Frankreich 2019)"
Loading the player ...