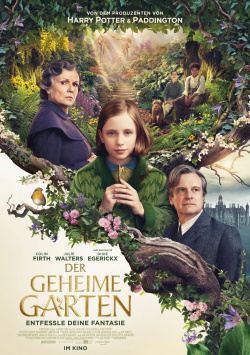 After the death of her parents, ten-year-old Mary Lennox (Dixie Egerickx) is taken from India to live with her uncle Archibald (Colin Firth) on his estate in the Yorkshire Moors. Here she is completely on her own, as neither her completely reclusive uncle, nor his housekeeper (Julie Walters) show any interest in the girl. And so she explores her new home on her own and comes across a garden that no one has been in for many years. When she meets her sickly cousin Colin (Edan Hayhurst), she wants to share this magical place with him. With the help of her new friend Dickon (Amir Wilson), she plans to bring Colin to the garden - a place that will change all their lives forever.

The novel "The Secret Garden" has been adapted many times, including numerous plays, a Broadway musical, four television series, and four films. Frances Hodgson Burnett's classic celebration of the childlike imagination, along with "The Little Lord", is one of the British writer's most beloved works, still holding great fascination for readers more than 100 years later. So 27 years after the last cinema adaptation, another film version is now coming to the big screen, in which the story is set a little later, but otherwise makes every effort to capture the spirit of the book. This should make the story accessible to a whole new generation of children.

The problem, however, might be that it's hard to define the right target audience. For small children the film is not really suitable, because it is very dark especially at the beginning and also from the slow narrative pace is not really what children are used to today. On the other hand, it is staged a bit too old-fashioned for teenagers, so that there is only a very small intersection that can find themselves in the story. Overall, the impression is that this "secret garden" is made more for adults who like to remember what power fantasy could have in their own childhood. But few older moviegoers actually redeem tickets for films starring children. So it's really hard to say who this literary adaptation can be recommended to.

That's a shame, because aside from making it very difficult to warm up to the main character, Marc Munden's film is convincing with a lovely set, great effects and strong actors. Both the experienced actors like Colin Firth or Julie Walters and the young newcomers deliver very strong performances. But in the end, the film just doesn't manage to unleash the power that distinguishes the book. What remains is a nice, visually stunning drama, but one that lacks too much of the fantasy that is actually celebrated in the story. For that, the bottom line is a still decent: worth seeing with slight sacrifices!

Cinema trailer for the movie "The Secret Garden (Großbritannien 2020)"
Loading the player ...