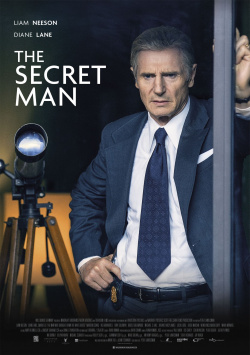 In the heated atmosphere of the summer of 1972 due to the Vietnam War and the civil rights movement, news of a break-in at Democratic Party headquarters adds fuel to the fire. Mark Velt (Liam Neeson), vice chief of the FBI, wants to shed some light on the matter. He quickly becomes convinced that the Nixon administration is directly involved in the Watergate scandal. But when the president appoints a new FBI director, Patrick Gray (Marton Csokas), who is conspicuously quick to end the investigation, Felt finds himself in a moral quandary. On the one hand, his loyalty belongs to the FBI, but on the other, his new boss's actions completely contradict his understanding of morality and justice. And so he decides to contact journalist Bob Woodward (Julian Morris). And it's not long before the government and FBI are after the mysterious whistleblower who will go down in history as Deep Throat.

The Secret Man is a reappraisal of the Watergate scandal from the point of view of the man whose identity was, until 2005, one of the best-kept secrets in the United States. It was the very fact that it was not known who was behind Deep Throat that made the story so exciting. Even the great film The Untouchables draws much of its suspense from the mystery surrounding the identity of the mysterious informant. That suspense aspect is now gone, and it shows in this new political thriller. It's nowhere near as exciting as Alan J. Pakula's 1976 Oscar winner.

Despite this, director Peter Landesman has succeeded in creating a gripping portrait of a man who must fight an inner battle between honor and conscience, risking everything to stand up to their most powerful people for the good of the country. At the same time, the film also tries to show the personal battles Felt had to fight. However, in the end they come so short that they could have been deleted. One plot line, for example, deals with Felt's attempts to free his daughter from the hands of a cult. This culminates in a very moving scene, but it loses much of its potential power by the fact that the dramaturgical build-up is almost completely obscured by the Watergate plot.

Atmospherically and especially in terms of acting, however, The Secret Man is convincing across the board. Down to the smallest supporting role, the characters have been cast with strong character actors. And Liam Neeson, who in the last few years has actually been subscribed to the action genre, finally gets to show that he can leave a lasting impression with more than just his fists. So The Secret Man is a quiet, but still very exciting political thriller with small weaknesses, but great actors. A perfect complement to The Untouchables and therefore also: Absolutely worth seeing!