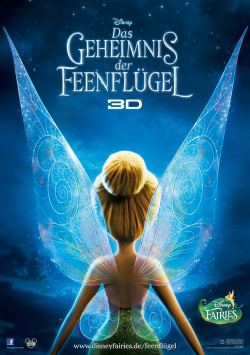 The Secret of the Fairy Wings

The beloved fairy Tinkerbell is finally coming back to the movies. Made famous by the classic Peter Pan, Tinkerbell has been at the center of her very own franchise for several years now: the Disney Fairies. After four successful releases for the home cinema market, the little fairy can now experience a very special adventure together with her friends on the big screen. The Valley of the Fairies is bustling with activity as many baskets still need to be woven for the fairies in the winter forest. Tinkerbell is extremely fascinated by the place that is off-limits to warm-weather fairies like her. But when she notices at the border to the other realm that her wings start to glow, it is clear to Tink: she absolutely has to go to the land of the Winter Fairies. With a ruse, she actually manages to steal into the frosty winter forest, where she meets the fairy Periwinkle. The wise elf Dewey reveals the incomprehensible to the two: they are sisters born from the laughter of the same baby. Gladly, now that they have found each other, Tink and Periwinkle would like to spend lots of time together. But crossing the boundaries of the other realm can have disastrous consequences - as the fairies soon discover.

The Secret of the Fairy Wings is a very charming children's film, with lots of imaginative ideas, a good mix of child-friendly suspense and humour, and loveable characters. So if you're worried about a gaudy girly movie in the style of Winx Club adventures or Barbie animated films when you see the title, rest assured. Sure, the cinematic adventure of the Disney Fairies is also colorful, a little kitschy and is clearly intended to appeal primarily to little girls. But in the best Disney tradition, there are plenty of elements that will appeal to audiences beyond that demographic. At the press screening, which was also attended by two kindergarten groups, it was particularly fascinating to see that especially the boys, who had pretended to be extremely cool beforehand because they wouldn't be interested in this girly stuff at all, were ultimately at least as captivated by the exciting and also funny story as the girls. And even adult companions don't have to constantly roll their eyes in annoyance, but are also easily enchanted by the world of fairies and elves.

Directors Peggy Holmes and Bobs Gannaway have managed to stage an animated film that doesn't overwhelm little viewers, that makes them laugh, but that also captivates them with a certain amount of suspense. At the same time, the more action-packed scenes aren't cut too quickly, nor is the 3D visuals too taxing. And at just 75 minutes, the film is also the perfect length to suit the attention span of young viewers and slowly introduce them to the cinema experience.

So Secret of the Fairy Wings is the perfect film for a relaxing and exciting afternoon at the cinema with little ones. Although children older than 9 years won't be able to relate to this very childlike world, but cinema-freshmen between 5 and 8 years will surely have a lot of fun here. Worth seeing

Cinema trailer for the movie "The Secret of the Fairy Wings (USA 2012)"
Loading the player ...