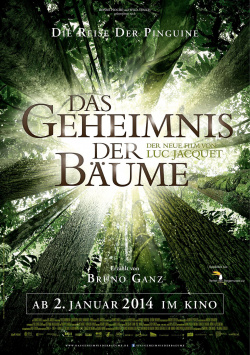 The Secret of the Trees

Filmmaker Luc Jacquet, who revealed the blockbuster potential of nature documentaries with The Voyage of the Penguins and also told a particularly beautiful story from the animal world with The Fox and the Maiden, once again invites his viewers on a fascinating journey into nature. Together with botanist and ecologist Francis Hall&eacute; Jaquet traces the evolutionary history of a primeval forest in The Secret of the Trees. In doing so, he uses fascinating landscape and detail shots, as well as animations integrated into them, to show how long it takes a tree to reach maturity, what symbioses it forms with animals and other plants, or even how important its inevitable decay is for the emergence of new life. The habitat jungle with all its flora and its small and larger inhabitants is explained in an entertaining as well as visually wonderful way.

In the process, secrets are conveyed to the interested viewer that should be completely new to most, while other findings should almost already belong to general knowledge. The film was shot in the Man&uacute; National Park in Peru. This environment proved to be almost perfect, as a single hectare of rainforest here is home to more than 220 different species of trees and the national park also has a tremendous wealth of species of birds, insects, amphibians or even reptiles. Another filming location was Gabon's tropical rainforest in the middle of the Congo Basin, where there are still giant trees over 70 metres high, whose gigantic trunks can have a diameter of several metres. The Moabi tree, which is native here, takes 600 years to reach its full size, making it a truly perfect candidate to show viewers The Secret of the Trees.

There's no question that such locations provide fantastic images. That Luc Jaquet has once again transported them to the screen in ways that are as educational as they are entertaining and simply beautiful, as he has in his previous films, is equally undeniable. However, the integration of deliberately artificial animations doesn't quite work. While they support the information content, they seem rather distracting to the real images with their almost technical simplicity. Even if Jacquet wanted to clearly distinguish the animations from the real footage, for example in order not to distort the excellent work of the camera team, in the end the impression remains that there should have been a somewhat less artificial-looking solution for the visual implementation of the evolutionary history of a primeval forest.

In contrast, the narrative voice of Bruno Ganz, who leads through the film in a calm, unagitated manner, is very well chosen. Not only is his voice extremely pleasant, but also the fact that the texts do not come across as too scientifically dry, but also not too childishly simplistic, but like the entire film, find the perfect balance between entertainment and information. Thus, The Secret of the Trees has become a really nice documentary, where only the too artificial looking animations and the overabundance of other representatives of this genre stand in the way of an unreservedly positive overall impression. Nevertheless, for all lovers of nature films: absolutely watch in the cinema, because only on the big screen the full power of the great images can unfold!

Cinema trailer for the movie "The Secret of the Trees (Frankreich 2013)"
Loading the player ...