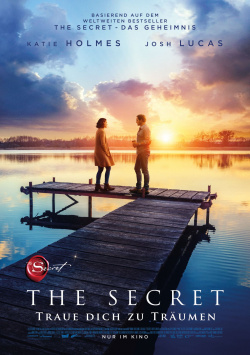 Since her husband died a few years ago, Miranda Wells (Katie Holmes) has to cope with everyday life as a single mother and businesswoman alone. And she's doing it more poorly than well. At the moment, everything seems to be conspiring against the young woman. She's more than strapped for cash, she's in a rear-end collision, and then she has to worry about her home when a tree crashes onto her roof during a storm. But charming Bray Johnson (Josh Lucas), of all people, whose car she had collided with, comes to her rescue during this crisis. His positive outlook on life seems to transfer to Miranda as well - until she learns that Bray has a secret that has connected them both for quite some time.

"The Secret is inspired by Rhonda Byrne's global bestseller of the same name, which has sold over 34 million copies worldwide and been translated into over 50 languages. In the book a method is described, how one comes by own thought energy to a fulfilled life. So it's easy to imagine what a story inspired by this self-help book might look like. Put a shovel of kitsch on it and finished is a particularly thickly applied Schmonzette, which can easily take on the film adaptations of various Nicholas Sparks novels.

However, with Andy Tennant ("Hitch - The Date Doctor", "Sweet Home Alabama") was found a director who knows his craft in this genre. And so, in addition to an engaging Southern atmosphere enriched with beautiful images, the film definitely has some successful moments to offer, in which Tennant tells the story with a refreshing wink. This lightens the whole thing up and prevents the viewer from getting a sugar shock. The ensemble cast - led by a convincing Katie Holmes and a charming Josh Lucas - performs routinely, but can do little about the fact that the characters are overall very stereotypically drawn.

"The Secret - Das Geheimnis" is extremely cheesy and the slightly esoteric message is not exactly subtly presented. Nevertheless, the film is entertaining, has some nice show values and a few thoroughly moving moments to offer. So if you liked it very romantic and don't mind an extra helping of kitsch and a little esotericism, this one can definitely be recommended. Worth seeing!