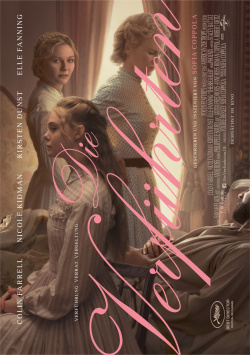 1864: In the turmoil of the American Civil War, the students of a Virginia boarding school for girls live far from the battlefields under the supervision of Miss Martha (Nicole Kidman) and young Edwina (Kirsten Dunst). But when one of the girls finds the wounded Corporal McBurney (Colin Farrell) while mushroom hunting and takes him to the boarding school, she also brings the war into the house. For the injured man is a soldier of the opposite side. It is clear to Miss Martha that she must turn the man in immediately. But she is persuaded that it would be unchristian to expose him to certain death. So she agrees to nurse the corporal back to health at her boarding school and only then turn him over to the Confederates. But the longer McBurney lingers in the house, the more an increasingly poisoned atmosphere of jealousy and unfulfilled lust develops among the women - an atmosphere that could explode into disaster at any moment.

In adapting Thomas Cullinan's novel The Beguiled, director Sofia Coppola returns, at least in some ways, both thematically and atmospherically to her acclaimed debut The Virgin Suicides. But it is this connection between the two films that makes it clear that Coppola has noticeably evolved as a filmmaker. While The Seduced has a similar aesthetic to the 1999 bestselling adaptation, it is somewhat more elegant and mature in its visual language. The same goes for the dramaturgical realization, which has a bit more subtle finesse. However, and this must also be said, Coppola loses herself in her new film a little too often in the beautiful images and long shots, so that in addition to the artistic beauty, unfortunately, a little boredom threatens to arise here and there.

For this, however, one is compensated as a viewer. On the one hand by the really strong ensemble, in which Colin Farrell can prove himself as the only man quite well, even if he is overshadowed again and again by a very strong Nicole Kidman and Kirsten Dunst, who is also convincing all along the line. The younger actresses like Elle Fanning and Oona Laurence also deliver really good performances, making the film a real treat in terms of acting.

On the other hand, the resolution also ensures that tough moments are quickly forgotten. The final minutes are wonderfully evil, putting the icing on the cake of a rousing story that takes a dark turn in the final act that is both surprising and consistent. What was initially thought to be dignified boredom is revealed by this twist to be a very cleverly constructed set-up of a plot framework that is brought crashing down in a fascinatingly subtle way. This is where Colin Farrell and Nicole Kidman in particular are at their best.

The Seduced is, behind its sometimes unwieldy but always fascinatingly beautiful façade, an abysmal and cryptic drama that ends up being much more than it first appears. Alone for the great finale, but also for the excellent actors and the engaging visual aesthetics here is a very clear: Absolutely worth seeing!