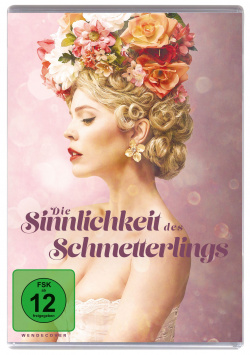 The Sensuality of the Butterfly - DVD

Movie: Since the death of his mother, 13-year-old Fin (Ed Oxenbould) has been living a completely introverted life in a small Australian town. His relationship with his father, college teacher Al (Ewen Leslie), is distant and complicated. Only when surrounded by butterflies in the forest - a passion he shared with his mother - does the boy feel happy. But then he meets attractive florist Evelyn (Melissa George). He is immediately intrigued by the former burlesque dancer, whose signature piece was her dazzling butterfly costume. But Al also quickly falls for Evelyn's charm and beauty, which could lead to a final rupture in his difficult relationship with Fin...

"The Sensuality of the Butterfly" is a moving drama in which the main characters all have to deal with loss, and do so in very different ways. While father Al plunges into a self-destructive affair with a student, Fin is cocooned in his very own world. And Evelyn, with her painful loss still to come, is also trying to let go of her old life altogether and find her footing in a complete reboot for the difficult times ahead for her. For Fin, this is compounded by the fact that he is walking on the threshold between child and adolescent, which ensures that the emotions in his body go completely haywire all the more.

Especially at the beginning, the film takes its time to revel in images and especially to let the audience immerse themselves in Fin's emotional world. It is easy to understand how much the boy is infatuated by Evelyn's sensuality on the one hand and how she reminds him of his deceased mother on the other hand. You understand why he is so upset by this and why it makes him angry when his father also shows interest in the woman. This is more than just jealousy, Fin has to fear that Evelyn is just another fling for Al.

As much time as is invested in developing the story and the conflicts therein, they are then quickly resolved at the end. The last few minutes feel a bit rushed, which is a real shame given what else is going on here. Director Priscilla Cameron would have liked to push the tempo a bit more at the beginning, in order to put a bit more time into the last act at the end. Then dramaturgically a more balanced overall picture would have emerged.

Nonetheless, "The Sensuality of the Butterfly" is a really beautiful film about grief and about finding each other through letting go. The calm narrative pace and the beautiful imagery give the drama a special atmosphere that saves the film even over the somewhat tame moments. For this, there is clearly a: worth seeing!

Image + Sound: The image of the DVD convinces with a good overall sharpness and a very warm color scheme. The fascinating imagery of the film comes just thereby very well to advantage. The audio, available as a Dolby Digital 5.1 mix, is very subdued overall, but this suits the story well. However, the subtle soundtrack and some small ambient noises ensure that the whole thing doesn't sound too centrally mixed. Good!

Extras: Unfortunately, the DVD has no bonus material to offer.

Conclusion: "The Sensuality of the Butterfly" is a quiet, touching drama about loss, letting go and also growing up. It's a beautiful film that just doesn't quite feel coherent towards the end. The DVD presents the drama in an appealing picture and sound quality, but unfortunately has no extras to offer. All in all, however, clearly a: recommendable!