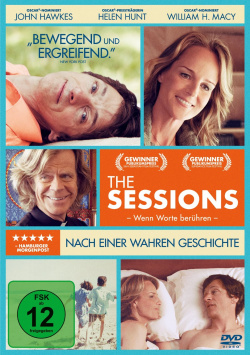 Film: Mark O'Brien (John Hawkes) has spent most of his life in the Iron Lung since he fell ill with polio as a boy. But at 38, the journalist and poet decides that he no longer wants his life to be determined by his disability and that he finally wants to lose his virginity. With the blessing of his priest (William H. Macey) Mark hires the sex therapist Cheryl Cohen-Greene (Helen Hunt) to lead him to the goal of his dreams in a fixed number of sessions. But in the course of these meetings the professional boundaries between Mark and Cheryl are increasingly blurred by the conversations and the physical closeness and it becomes clear that not only hands but also words can touch in a very special way...

"The Sessions - Wenn Worte berühren" is based on the essay "On Seeing a Sex Surrogate", which Mark O'Brien published in an American magazine in the 80s. Based on the article, O'Brien's autobiography and numerous conversations with his partner Susan Fernbach and Cheryl Cohen-Greene, filmmaker Ben Lewin has created a very moving film that strikes the perfect balance between life-affirming humor and emotional drama.

John Hawkes, who has made a name for himself as a character actor with films like "Winter's Bone" or "Martha Marcy May Marlene", delivers a performance that is as impressive as it is wonderful with his portrayal of a severely handicapped man who, despite his difficult life situation, has never lost his optimism and humor. His game does not aim to develop compassion for Mark, but to be infected by his zest for life and his charm. And he succeeds more than credibly.

What really makes the film special, however, is its completely relaxed approach to the topic of sex and the needs of disabled people, which are often regarded as taboo, especially for an American film. Both the conversations about sex and the nude scenes are staged in a completely natural way, without obviously provoking or being voyeuristic. Helen Hunt, at the age of almost 50, is just about to take off her clothes with the natural ease that is necessary to make her portrayal of the sex therapist credible. Lewin and his actors circumnavigate every threatening cliff in the very sensitively staged scenes, which would have made the film embarrassing, cramped or even ridiculous.

"The Sessions - When words touch" is very sad in many moments. Especially since Hawkes makes it clear with his looks that Mark doesn't really long for sex that much, but just for love and a kind of normal relationship, which he will never be able to have, there is a certain heaviness about the whole movie, which Lewin, however, manages to break up through the targeted use of restrained, yet quite wonderful humor. The moving story of Mark O'Brien, who died in 1999, is not a depressing, bulky art cinema, but a magical feel-good film that touches not only the heart but also the laugh muscles. And there's one more than deserved for that: worth seeing!

Picture + sound: While the sound is rather reserved due to the genre and mainly takes place in the central area, the very clean picture pleases with a very atmospheric coloration and a good overall sharpness, which can also convince with the representation of smaller details. Good.

Extras: As a bonus there are three short documentaries about John Hawkes (about 4:16 min.), Helen Hunt (about 4:05 min.) and about "The Woman Mark O'Brien Loved" (about 4:15 min.). Not uninteresting, but too little to get a deeper insight into the shooting and the real backgrounds.

Fazit: "The Sessions - Wenn Worte berühren" is a sensitive drama, whose well-measured humor and refreshing nonchalance in combination with the good performances of the actors result in a magical feel-good film, which touches, but also amuses. For friends of the demanding American independent cinema this DVD is therefore also: absolutely recommendable!