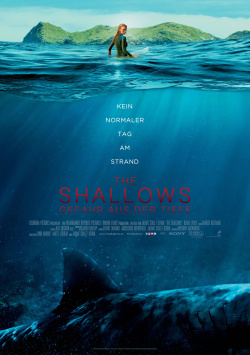 The Shallows - Danger from the Deep

A dreamlike beach, restful solitude and paradisiacal conditions for surfers - that's what Nancy (Blake Lively) gets when she finally finds the little beach her late mother had always raved about. Here, the young woman actually just wants to spend a few quiet hours and do some surfing, when she is attacked by a great white shark in shallow waters. Injured, she is able to save herself on a rock in the sea, only a few hundred meters away from the beach. But those few yards could be miles, because there seems to be no escape from the rock. The shark circles around her constantly, giving her no chance to escape to land. And help is nowhere in sight. Her end seems sealed - but Nancy won't give up that easily.

With The Shallows - Danger from the Deep, director Jaume Collet-Serra (Non-Stop, Unknown Identity) ventures into dangerous waters. Because movies that are only carried by one actor or actress are in principle a risk, because they not only need full acting commitment, but also a rousing story to be able to captivate the audience. True, the film is not strictly a one-person play, as a few supporting characters do pop up here and there. But for the most part, Blake Lively is alone on screen - at most in the company of an equally injured Seagull. Collet-Serra does a good job of making Lively look attractive. But that, of course, is not enough to build and sustain tension for over 90 minutes.

However, despite some truly harebrained twists in the story, which includes the delightfully trashy finale, the film is very entertaining and grippingly directed for long stretches. Collet-Serra makes the ever-present danger very palpable and intensifies it by the fact that the rescue is actually constantly within reach. You shouldn't set a high value on logic. The Shallows - Danger from the Deep is strictly speaking a nicely filmed B-movie. But as such it is a lot of fun. Nancy's fight for survival is dramaturgically and acting-wise maybe not the greatest thing ever. But the director always manages to push just the right buttons, so that the whole thing works well even in the most nonsensical moments.

So if you just want to be entertained in a thrilling way, if you generally have a soft spot for shark movies rather of the ilk of Deep Blue Lake than Great White Shark, and if you're not too fussy about logic, this maritime thriller can be warmly recommended to you. And therefore, despite some weaknesses at the end there is also a decent: Worth seeing!

Cinema trailer for the movie "The Shallows - Danger from the Deep (USA 2016)"
Loading the player ...