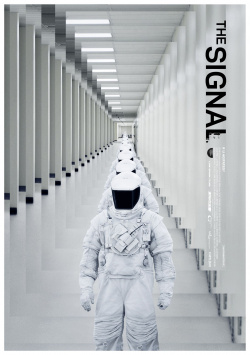 Computer geeks Nic (Brenton Thwaites) and Jonah (Beau Knapp) just can't put their passion to rest. Although they're actually traveling across the southwestern U.S. with Nic's girlfriend Haley (Olivia Cooke) to help the girl move, the college students use the trip to track down a mysterious hacker rival who calls himself Nomad. The latter's signal, which Nic and Jonah have tracked down, seems to be broadcast from a location not far from their planned route. Despite some reservations, the trio decides to take the detour and then believe they have found Nomad's lair in an abandoned house. But then chaos befalls them, and when Nic suddenly regains consciousness in a research lab, a nightmare of unimagined proportions begins.

To reveal more about the story of The Signal would significantly diminish the enjoyment of this original mystery thriller. Director William Eubank steers his film in completely unexpected directions several times, which makes for an extremely high level of suspense, especially in the first half. Although some genre connoisseurs will be able to guess with time in which direction the whole thing is going. Nevertheless, the actual resolution at the end can surprise you in a certain way. However, you have to be aware that Eubank enriches his story with a lot of cryptic moments and in the end he leaves it up to the viewers themselves to put together the explanation for the story from all the puzzle pieces he has delivered scattered throughout the film.

Due to the fact that he hardly provides any clear answers and much is left hidden, it can seem that the story is so convoluted that Eubank has lost himself in it, showing some scenes only because they seem particularly visually exciting. So you should definitely have a soft spot for challenging sci-fi/mystery fare and cinematic puzzles to enjoy The Signal. The film, which sometimes uses the visual aesthetics of Stanley Kubrick and then again the convoluted mind of a David Lynch, is in the end not brilliant like the role models it was obviously inspired by. But he knows perfectly how to build up a fascinating atmosphere, by which one is extremely captivated especially in the moments when so many question marks rise above the heads of the audience and which you can not shake off so easily.

No matter if you can do something with the story and the staging, William Eubank has to be credited in any case for the fact that in times where most movies of this genre are determined by the motto faster and faster, louder and louder, where there are almost only sequels or remakes and where speed and special effects too often dominate over any form of story, he tried to create something completely original and his own, which doesn't necessarily submit to the taste of the masses. And that alone makes The Signal a very special film.

Surely, such ambitions and intriguing imagery do not make a good film. But these aspects should be reason enough to give this work a chance. If you manage to open your mind a little bit and get involved with the cryptic storytelling, you'll get a very special sci-fi experience that has the potential to become a cult movie. However, if you prefer it clearly structured and also attach great importance to a lot of speed and clearly recognizable logic, you might tend to want to turn off this signal very quickly. Nevertheless, there is from me despite certain reservations a convinced: Absolutely worth seeing!