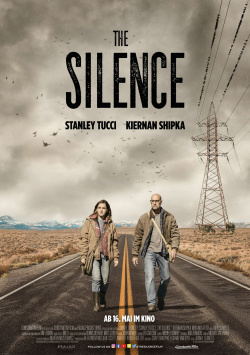 During an expedition in an inaccessible cave system in North America, a dangerous species of flying parasite is released. Called a wasp, this species can't see, but pounces mercilessly on anything it senses with its excellent hearing. Humans seem to be helpless against these primeval monsters. Many try to barricade themselves in their homes or flee to supposedly safe places. Such is the case with the family of deaf Ally (Kiernan Shipka). Their parents (Stanley Tucci and Miranda Otto) are convinced it's safer for them outside the city. But even the drive to the countryside quickly turns into a merciless fight for survival, where even the smallest noise can mean certain death. And then the family must also realize that in these apocalyptic times, danger comes from more than just wasps.

The Silence has a very big problem. No, this doesn't mean the numerous clichés or logic holes that the script and production of this Netflix co-production has to contend with. Rather, it's the fact that with Bird Box and especially with A quiet Place, two films with similar themes have been released in the past few months that have executed the whole thing much better and more effectively. Without these direct comparisons, The Silence would still not be a masterpiece. But the legitimate criticisms certainly wouldn't weigh quite as heavily.

But as it is, you keep getting distracted and can barely enjoy the atmospheric imagery while wondering: why does Ally still have wi-fi after a quasi-apocalypse in the middle of nowhere? Or: Wouldn't it have been enough to put a yappy dog or a grandmother with asthma in the car for the family, did it really have to be both? There are so many moments that pull you out of what is in itself a thoroughly suspenseful story, especially when a comparison to the too-similar genre representatives of the recent past forces itself upon you.

Director John R. Leonetti (Annabelle) does manage to build up a few effective moments of suspense every now and then. But he doesn't quite succeed in tying them together with a decent story arc. The very rushed ending doesn't help much to improve the rather mixed overall impression. Not really a bad film, which is really good for a relaxing Netflix evening. For a visit to the cinema, however, is offered too little in the end. Therefore, there is also only one: With significant deductions worth seeing!

Cinema trailer for the movie "The Silence (USA/Deutschland 2018)"
Loading the player ...