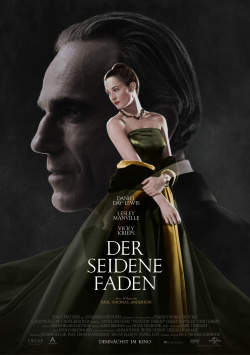 Reynolds Woodcock (Daniel Day Lewis) is a genius when it comes to fashion and tailoring. High society, aristocrats, and movie stars clamor to slip into clothes designed by him. With the help of his sister Cyril (Lesley Manville), the fashion designer has made his House of Woodcock the premier address for exclusive fashion. Women are a great inspiration to the bachelor - but nothing more. Many succumb to his charms, but as soon as they stop inspiring him with new ideas, his sister has to make sure they disappear from his life again. That seems to change when he meets Alma (Vicky Krieps). The young woman seems to be the first who could take a permanent place in the life of the genius tailor - and not just as a muse. But whether she can come to terms with his whims, his need for control and his obsession is another matter entirely.

The Silken Thread is a very difficult film - both to watch and to discuss. There's no question that, aesthetically, Paul Thomas Anderson is a great filmmaker. Many of the images he has brought to the screen are once again magnificent. In addition, he has once again managed to get top performances out of his actors, most notably Daniel Day Lewis. In this regard, it is also understandable why the drama is nominated for almost every film award and hailed as a masterpiece by some critics and cineastes.

ABER: As a storyteller, Anderson is arguably out of touch. Sure, there's an audience for that too, as evidenced by the many consistently rave reviews. But if you can't be completely intoxicated by the visuals and can't get into the seeeeeery slow rippling narrative flow, you'll have a very hard time watching over two hours of not-so-sympathetic people making each other's lives hell and yet not being able to be without each other. It may be very elegantly staged, but it's also enormously exhausting.

especially since it becomes clear very quickly what the story is actually getting at. After a certain point there are no more surprises, no real further development, so some aspects are just repeated or overly broad. Of course, it has to be said that this is all a matter of opinion, as there are quite a few film lovers who appreciate Anderson's very special style and consider it high cinematic art. You can argue about that, of course - or you can just accept that what you find quite great yourself, others find unbearably boring and too detached.

And for that very reason, in this particular case, I'd like to leave it at a somewhat squishy conclusion. For me personally, The Silken Thread was a real test of patience and I know quite a few who felt the same way. If you're looking for a movie with real entertainment value, you shouldn't go to the cinema. On the other hand, I can understand why a work like this is not only celebrated by the feuilleton, but also by lovers of high quality cinema. And for this audience it can be said quite clearly: If you already found Anderson's The Master quite great in terms of pace and style, you will also enjoy this film.

Cinema trailer for the movie "The Silken Thread (Großbritannien 2017)"
Loading the player ...