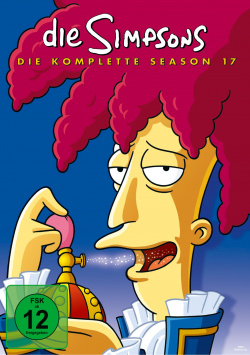 Film: Over 25 years they already exist, the "Simpsons" from Springfield. 25 years in which the yellow cult family could make their fans laugh again and again and provided countless wonderful moments in over 560 episodes and an enormously successful movie. Since 2001, individual seasons of the cult series have been successfully released on DVD. After thirteen years, Fox Home Entertainment has now arrived at season 17, which is again available in two versions - as a classic DVD box and as a limited edition in Tingel-Tangel bob design.

Homer, Marge, Lisa, Bart, Maggie, Mr. Burns, Moe, Smithers, Ned Flanders, Krusty - they have all long since become an integral part of pop culture. Matt Groening and his outstanding team of authors, including the successful US late night talker Conan O'Brien in the early years, and artists have undoubtedly shaped and changed the TV landscape with this series. However, many fans are of the opinion that the quality of the series has clearly deteriorated at some point around the tenth year. That can't really be dismissed. But if you look at the episodes of the 17th season, it becomes clear again and again that some of these episodes can still be attributed to the heyday of the series.

Admittedly, there are one or the other saga. But the mixture of obvious gags, subversive humour and absurd comedy still works well in the seventeenth year! Moments like a "Itchy & Scratchy" musical based on the "Lion King", Lisa's battle evolution versus creation history, a parody of the classic disaster film "Poseidon Inferno" or Selma and Patty's plan to kidnap the real "MacGyver" Richard Dean Anderson make the 22 episodes of the season a real pleasure. Even if Marge loses her memory and can suddenly remember everything - even Milhouse - but not Homer or if the Simpsons take part in a "women swap" and are supported in the original by Ricky Gervais, in the German version by Christoph Maria Herbst, the season is extremely much fun despite some weaker moments.

The DVD also allows fans to watch the episodes in the English original. As wonderful as the German dubbed version may be, much of the wordplay is unfortunately lost in the translation. But no matter whether in English or German: "The Simspons" are simply cult. That has been the case over the past 25 years - and it will continue to be the case over the next 25 years!

The consequences in detail:

Milhouse of sand and fog

Margin and the Women's Club

Who is Homer's Father

The Road of the Damned

Equation with an unknown

Blessed are the ignorant

image + sound: The technical implementation of the seventeenth season can once again be regarded as very successful. The picture pleases with its strong colors, the clear lines and a very good overall sharpness. The sound is a bit front heavy, but here and there you can hear some very nice surround effects that bring life to the multichannel area. For a cartoon series, the technical implementation is really very good!

Extras: Like the previous boxes, there is an audio commentary for each episode, where Matt Groening is supported by authors, directors, producers, artists and speakers. These comments are really a pleasure, because the good-humoured protagonists always have a lot of interesting details about the individual episodes and their origin to report between various jokes.

Real cult is on the third disc, on which the best couch gags were cut together (approx. 21:22 min.). In addition, the episode "Frauentausch" is offered in additional language versions. Finally, fans on DVD 4 will be offered scenes from the season (approx. 11:43 min.) and a live script reading (approx. 34:55 min.). The script reading, however, is only available as an audio track, while the script pages can be read along with it. Who still clicks around a little in the menu, could discover also still another Easter Egg. Good!

Fazit: The seventeenth season of the "Simpsons" doesn't show the yellow cult family in top form anymore, but this season still has a lot of strong consequences and wonderful moments, which make buying the box an absolute matter of course for fans. The DVD conversion is very well done in terms of both technology and extras! And for that there is a very clear one: Absolutely recommendable!