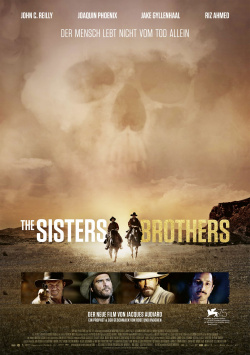 The quiet Eli (John C. Reilly) and hard-drinking Charlie (Joaquin Phoenix) are hit men for hire in 1851 Oregon: as the Sister Brothers, they are feared throughout the land and have had many a crook, as well as many an innocent, on their consciences. For Eli, the time has come to retire and open a shop. The latest contract they've received from the mysterious Commodore could bring in enough money to make that dream a reality: The brothers are to find and kill chemist Hermann Warm (Riz Ahmed). Warm has developed a formula to make gold nuggets visible in the riverbed, and the Commodore wants that formula at any cost. Jim Morris (Jake Gyllenhaal), the Sister Brothers' contact, has set himself on Warm's heels and is now pursuing plans all his own. Clearly, a life-and-death struggle is about to ensue.

The Sisters Brothers is the English-language debut of award-winning director Jacques Audiard. He had previously served up rather heavy fare with A Prophet or even The Taste of Rust and Bone. In direct comparison, his foray into the Western genre is almost light entertainment. Again and again Audiard uses subtle humor, which gives the sometimes very slowly staged events a little bit of speed. Every now and then there are also grippingly realized gunfights and other moments of tension, which also help to make the somewhat unwieldy production accessible to a wider audience.

The great actors also help. John C. Reilly and Joaquin Phoenix are just great as mismatched brothers. Reilly in particular is more than convincing as the slightly naive Eli, who loves his horse more than anything and is always charming and respectful towards women, but mutates into a stone-cold killer in the face of his enemies. The supporting cast is no less prominent. Jake Gyllenhaal, for instance, is only seen comparatively rarely, but delivers a very strong performance in the scenes he does carry.

Fascinating imagery and breathtaking landscape shots make the film a visual treat as well. With The Sisters Brothers, Jacques Audiard has created a Western that expertly avoids the clichés of the genre and is difficult to pigeonhole. But that's exactly what makes it, despite some length and some somewhat difficult moments at the end: absolutely worth seeing!

Cinema trailer for the movie "The Sisters Brothers (Frankreich/Spanien/USA 2018)"
Loading the player ...