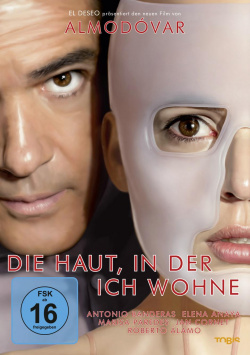 The Skin I Live In - DVD

Film: With The Skin I Live In, Pedro Almodóvar has achieved another cinematic feat. Intelligent, original and disturbing, this thriller drama comes across and it is suggested to any interested viewer to let as little as possible be revealed about the content. Because even if the big surprise of the film can be guessed at a certain point, the actual revelation is only really effective when you are in the dark as long as possible.

Therefore, only this much should be revealed at this point: After his wife is burned to death in a car accident, genius plastic surgeon Dr. Robert Ledgard (Antonio Banderas) does everything he can to create artificial skin tough enough to survive a fire like the one that killed his wife. Secluded in his luxurious home, Robert, with the help of his loyal housekeeper Marilia (Marisa Paredes), has been working for years on his test subject, the beautiful Vera (Elena Anaya), who, after all the surgeries, looks just like Robert's late wife. Every move Vera makes is closely monitored and she always remains locked in her room. This is because no one is supposed to know about the research and secret operations Robert is performing in his home. But when Marilia's son shows up at the house one night on the run from the police, events take a dramatic turn.

The Skin I Live In is kind of a sick movie - but in this particular case, that should be taken as a compliment. The story is disturbing and grippingly directed right up to the end. Using flashbacks and changes in narrative perspective, Almodóvar gradually pieces together a puzzle that uses elements of drama, romance and thriller as much as it does classical Greek tragedy. Spiced with whimsical humor and a pinch of eroticism, the result is a fascinating trip into the abysses of an obsessed soul that is difficult to escape as a viewer.

In addition to his once again fascinating visual language, Almodóvar can once again rely on an extremely strong acting ensemble for his latest work. Antonio Banderas, in particular, is better here than he has been in a long time. Elena Anaya (Talk to Her) is beguiling and vulnerable, but far from the classic victim. And Robert Àlamo, in his tiger costume, is arguably the biggest creep to hit theaters in 2011. Watching them and the rest of the cast fill their characters with life and the story with drama, love, fear and despair is a simply great experience and quite a pleasure.

Not much more should be said about The Skin I Live In at this point. After all, the more you know about this film in advance, the less powerful the convoluted story can then unfold. Certainly, this very special thriller is not really for the mass audience, but rather something for tried and true arthouse enthusiasts. But for those who love the films of Pedro Almodóvar or like to engage in very special viewing experiences, the film based on the novel by Thierry Jonquet can definitely be recommended. Absolutely worth seeing!

Picture + Sound: The undercool, detail-loving set comes off convincingly thanks to the coherent colour scheme and good sharpness of detail. There are small weak points to discover here and there in the picture quality, but overall the very big points of criticism remain absent. The audio remains largely restrained, dominated by the dialogue and the atmospheric score. This is not very spectacular, but fits perfectly with the atmosphere of the story. Good!

Extras: The bonus material sounds very extensive, which unfortunately turns out to be a fallacy on closer inspection. The making of is a short German-language promo clip (about 3 mins) and the seven featurettes are each about 1-2min B-roll footage. The interviews aren't particularly in-depth either, but at least they offer a little insight into the making of the film. In addition, there are teasers and trailers, as well as other program tips from the provider.

Conclusion: The Skin I Live In is an ehr special thriller, which conveys its message, although not particularly subtle, but extremely exciting and original. Great actors and the as always first-class direction of Pedro Almodóvar make this film a real must for fans of the director and lovers of eccentric arthouse thrillers. The DVD is technically well done, but the bonus material is a bit too superficial to do justice to this good film. Nevertheless, a clear purchase recommendation can be pronounced for this disc!