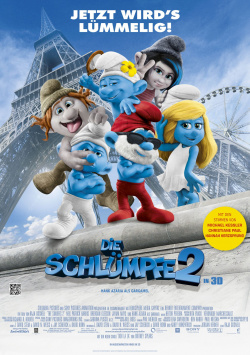 What a Smurf! Just when the Smurfs thought they'd gotten away from the nasty Gargamel (Hank Azaria) once and for all, he takes another swipe at the jolly blue dwarves. Actually, Gargamel had thought he could get his hands on the powerful Smurf essence by creating two Smurf-like creatures, the tykes Zicki and Hauie. But it quickly becomes apparent that he desperately needs a real Smurf to put his nasty plans into action. From Paris, he uses the last of his remaining Smurf essence to open a portal to the Smurfs' village and kidnap Smurfette, whom he had once created. Papa Smurf, whose magic powers once turned Smurfette good and blue, naturally wants to rush to the rescue. Together with Grouchy, Clumsy and Beauty, he travels back to the human world, where the Smurfs, with the help of their loyal companions Patrick (Niel Patrick Harris) and Grace (Jayma Mays), seek to thwart Gargamel's plans. But they have no idea that the evil wizard has found a way to pull Smurfette more and more to his side.

Director Raja Gosnell is kind of a phenomenon. His films can usually be called successful even with quite a bit of good will. The always same building block principle that his stories follow and the extremely simple humor that relies more on overly dorky villains or burp and fart jokes than on cleverly constructed gags make Gosnell's comedies little charming consumer products whose half-life has already expired before the credits are over. And yet: especially with children, he hits the mark again and again with films like Scooby Doo, Beverly Hills Chihuahua or the first part of The Smurfs. While adults often scratch their heads in wonderment as to why such stale claptrap makes for hearty laughter, little moviegoers are deliciously amused by the gags served up with little subtlety.

The Smurfs 2 is no exception. From a purely qualitative point of view, the film is not really good, despite some quite nice moments. It resembles the first part too much, which even the newly added boors can't change. Hank Azaria as Gargamel is a flat joke and the Smurfs, who are now allowed to say cool things like Ey, Alter, don't exude much of the charm that made the blue dwarfs the cult figures they are today. And the very penetrating way in which the usual moral club is unpacked here for child-oriented Hollywood comedies, with which the message family is the very best is then beaten into the audience, doesn't exactly make for an enhancement of the whole.

However, it is undeniable that the mix of animation and live-action film serves its target audience well and offers children between the ages of 5 and 10 plenty of fun. You don't have to like that as an adult Smurfs fan, but you can't deny it. Girls will find goth hottie Zicki totally cool, while boys can be amused by the dorky Hauie. The usual roller coaster effects, a few snappy pop songs by Britney Spears and co. to accompany the action and a little bit of suspense ensure that kids will leave the cinema smurfily happy. Therefore, even if The Smurfs 2 isn't really a good movie, it's still totally worth seeing for little fans of the first one - sad, but true!