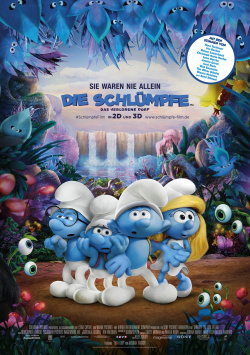 The Smurfs 3 - The Lost Village

In Smurfville, everything goes on as usual and there is general contentment. Only Smurfette (voiced by Nora Tschirner) is sad. She knows that she is accepted and loved here. Yet she is different and feels that she is not really at home here. She wants to find out what else exists outside of Smurfville. With the help of a mysterious map, she sets off on a dangerous journey to the lost village in tow of Brainy (Axel Stein), Hefty (Rick Kavanian) and Clumsy (Tim Oliver Schulz), who is also after someone else: the nasty wizard Gargamel (Christoph Maria Herbst).

Different from its two predecessors, The Smurfs 3 - The Lost Village is not a mix of animated and live-action film, but a pure animated work. And that was a very good decision, because the imaginative Smurf adventure works much better than the first two films. Admittedly, too many elements are used here again, as you know them from countless other animated films of the last years. Genuine ingenuity rarely comes into play. And also the humor is in some scenes similarly flat, as in the first two films. However, the makers have managed to enrich all these familiar and unfortunately also completely hackneyed set pieces with a lot of imagination, endearing wit and some charm.

The result is still not perfect. For that, the production just follows too much the same pattern as so many other animated films. It simply lacks the unique selling point that even the cute blue Smurfs don't represent. However, in direct comparison to the really lackluster first two installments, Search for the Lost Village is a quantum leap forward in terms of quality. The dubbing is okay, though it's definitely noticeable which characters are voiced by professional actors and which are voiced by YouTube stars supposedly so popular with the target audience.

The Smurfs 3 - The Lost Village, despite its flaws, manages to make it clear why the little blue Smurfs have been so popular for generations. The film is a colourful, exciting but also very funny adventure for children, with some nice touches, pretty animation, nice 3D effects and harmless gags. However, it is also quite fun as an adult to dive into the magical world around the lost village, which is why, despite all justified criticism, there is also a deserved viewing value in the end.