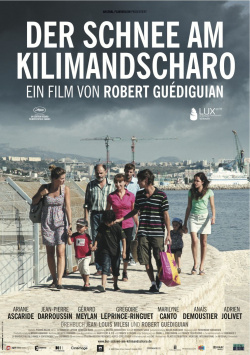 The Snows of Kilimanjaro

Michel (Jean-Pierre Darroussin) is convinced he is a good man. For many years, he has been involved with the union. And when quite a few employees had to be laid off at the port, Michel, whose job was actually safe, also put his name into the lottery drum to show that he doesn't think he's any better. When he is pulled and put into early retirement, he wants to enjoy his time at the side of his wife Marie-Claire (Ariane Ascaride). The fact that he is given money for a trip to Kilimanjaro by the guests at a big birthday party comes just in time. But then Michel and Claire's lives change abruptly when they are robbed in their own home and the money for the trip is stolen. By chance, Michel finds out that one of the attackers was his former young work colleague Christophe (Grégorie Leprince-Ringuet), who has been fired along with Michel. A mixture of anger and humiliation leave Michel in no doubt that Christophe belongs in prison. But after the young man is arrested and Michel and Claire learn more about his background, doubts begin to surface in the couple's mind...

The Snows of Kilimanjaro is a very sensitive drama that grapples with the question of whether it is possible to say, in a very blanket way, that all criminals simply belong locked away. Director Robert Guédiguian, whose father was himself a dockworker in Marseille, likes to deal with the working class in his films and makes no secret of his clearly left-wing political stance. Even if the do-goodery of the main characters comes across as a bit too idealized, the questions the film raises are quite interesting.

Naturally, any viewer would probably initially react as Michel does. The humiliation of being robbed in one's own home, the rage at having the money that friends and family have painstakingly scraped together stolen, naturally dominates over any sense of social justice. So it doesn't matter what made the perpetrator do what he did. And of course it must be punished, there should be no doubt about that, even with all charity. But are there perhaps reasons that allow a different perspective on the act, that make it necessary to rethink the punishment and also question one's own actions?

So what does it mean to be a good person? To this question Guédiguian attempts to provide an answer - if this is even possible. But for all the social commitment the film espouses, there is of course the question of whether the viewer is merely being lectured or, after all, entertained? The answer is clearly yes, as long as you appreciate French drama. For The Snows of Kilimanjaro is superbly acted cinema with an engaging visual language. Marseille is captured in wonderful imagery, while still feeling authentic for all its beauty.

So lovers of European arthouse cinema are treated to an engaging drama that entertains while watching, at times infuriating, at others simply moving, but which could still make for an interesting discussion or two after the credits roll, and is therefore well worth watching!

Cinema trailer for the movie "The Snows of Kilimanjaro (Frankreich 2011)"
Loading the player ...