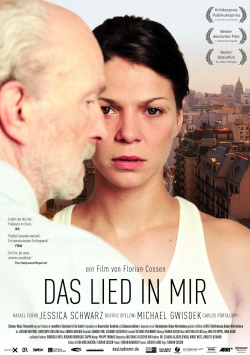 The Song in Me

Actually, Maria (Jessica Schwarz) wanted to spend her vacation in Chile. But when she hears a young mother singing a Spanish nursery rhyme to her baby during a stopover in Buenos Aires, she bursts into tears completely out of control. Although she doesn't speak a word of Spanish, she recognized this song. Instead of continuing her journey, Maria stays in Buenos Aires, hoping to find out what connects her to that song. When her father Anton (Michael Gwisdek) learns of this, he immediately sets off for Argentina, hoping to protect his daughter from her past. Or maybe he just wants to protect himself from the consequences of the truth?

With his debut "Das Lied in mir" director Florian Cossen has staged a haunting drama about self-discovery, belonging and family. Jessica Schwarz carries the film with a rather introverted performance limited to a few gestures and rather frozen facial expressions, though small changes speak all the more clearly. Michael Gwisdek, who was not at his best in "Father Morgana", proves that sometimes less is more. His very restrained acting illustrates very convincingly Maria's father's fear of losing his daughter when she learns the truth about her past.

Buenos Aires also plays a big role in the film. The way Cossen and his team have captured the city and worked Argentina's recent history into the story gives the multi-award winning drama a very special atmosphere, which proves to be quite the strong point of the production for those viewers who can relate to slightly bulkier, undercooked dramas. However, it is also this cold atmosphere, filled with a certain sadness, that makes it difficult to relate to the emotional depth of the story in its entirety. It is true that both the language barrier between Maria and the people closely connected to her past and the impossibility for the young swimmer and her father to continue their inherently close and loving relationship in the future are perfectly conveyed. But the resulting dramatic weight makes the film arguably unwieldy and difficult to access for an arthouse-untrained audience.

So "The Song Within Me" is a well-acted and also engagingly filmed drama that is too crushed by its own ambitions and would have benefited from a little uplifting levity. Because only a few moviegoers like to be entertained by permanent tristesse - and viewers this film definitely deserves