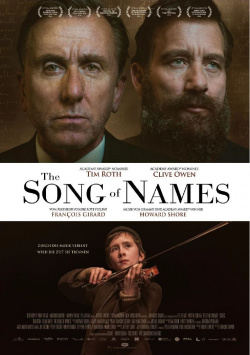 The Song of Names

During World War II, Polish-Jewish Dovidl Rapaport, a true prodigy on the violin, was taken in by the family of Martin Simmons. The two boys almost became something like brothers until Dovidl disappeared without a trace moments before his debut concert in London in 1951. Since then, Martin (Tim Roth) has become obsessed with finding his "brother". He simply must know what happened to the boy and why he so abandoned Martin's father, who had paved the way for him to have a great career. But it's not until 35 years after his disappearance that there's a hot lead that confirms Martin's belief that Dovidl (Clive Owen) is still alive. And so he embarks on a journey in the footsteps of a man who was once so close to him, yet whom he never really seems to have known.

"The Song of Names" tells the poignant story of a search for truth and about the special power of music on different time levels. Director Fran&ccedil;ois Girard has already used music as a central part of his stories with films such as "The Red Violin", "The Choir - Voices of the Heart" and "32 Variations on Glenn Gould". That's the case again here, though this time Girard enlisted the help of Oscar-winner Howard Shore. Shore spent two years studying the cantorial tradition to compose the titular "Song of Names". In addition, noted conductor/teacher Judith Clurman and Bruce Ruben, cantor at Brooklyn Heights Synagogue, are assisting him in reconstructing the Jewish liturgical tradition.

Martin must realize as the story unfolds that, as close as he was to Dovidl for many years, he could never truly understand him until he understood the history of his family and all the Jews who perished during the Holocaust. Girard was keen to deal with the Holocaust in the story without showing the horror directly. His film relies on very quiet tones, but then is able to unleash its full power in the important scenes - such as when Dovidl learns of his family's fate.

Very well acted - both by the "old bunnies" and by their younger alter egos - and directed with a sensitive hand, "The Song of Names" is a very moving drama that also has a few light, very beautiful moments to offer. A film against forgetting, a film about the healing power of music and a film about friendship and forgiveness, which can be recommended to lovers of small but fine arthouse dramas. Worth seeing!

Cinema trailer for the movie "The Song of Names (Kanada/Großbritannien/Deutschland 2019)"
Loading the player ...