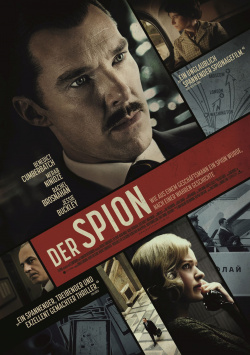 In the early 1960s, the conflict between the West and the Soviet Union threatens to escalate. At the height of the Cold War, the CIA and MI6 intelligence agencies keep getting important information leaked to them by high-ranking Soviet officer Oleg Penkovsky (Merab Ninidze). In order not to put their informant in danger, the intelligence agencies decide to provide him with a completely inconspicuous contact. The choice falls on British businessman Greville Wynne (Benedict Cumberbatch), who reluctantly allows himself to be recruited as a spy. An unexpected friendship develops between Penkowski and Wynne over time, which is put in jeopardy when Penkowski is threatened with exposure...

"The Spy" is based on a true story. Screenwriter Tom O'Connor has spent a long time researching Oleg Penkowski and Greville Wynne, and has tried to recreate as realistic a picture of events as possible from a wide variety of sources. Director Dominic Cook has staged the whole thing in a very atmospheric and stirring way, and his film lives primarily from the strong acting of the two main actors. Benedict Cumberbatch and Merab Ninidze embody the bond between the two men from very different worlds so believably that it makes the events of the final act all the more intense.

Overall, the film may be a rather conventional spy thriller. The supporting characters in particular are drawn rather one-dimensionally. However, the story itself is exciting and engaging enough to stand up to minor lengths and the somewhat stale production. Together with the strong acting of the main actors the movie still manages to rise above average in the end. And especially towards the end, the otherwise rather undercooled production still manages to really touch the audience emotionally.

"The Spy" convinces with a usual strong acting Benedict Cumberbatch, a very sympathetic and intense playing Merab Ninidze and a Rachel Brosnahan, who can still get a lot of strength and emotionality out of her somewhat thankless role. No masterpiece of the genre, but a very exciting film despite many quiet moments, which shows what individual people can achieve on the big stage of world politics. Because it is extremely likely that the world would be a very different place today without Oleg Penkowski and Greville Wynne. And for that reason alone, this film - despite minor flaws - more than deserves a "Seeable"!

Cinema trailer for the movie "The Spy (Großbritannien 2020)"
Loading the player ...