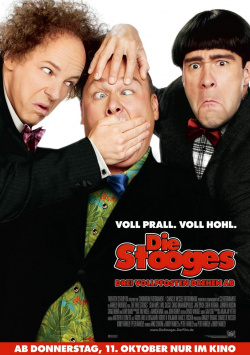 The Three Stooges are an American institution. Although the original short films featuring Larry, Curly and Moe were made between 1934 and 1954, almost every child today still knows the popular characters and their humorous trademarks. Now the Farelly brothers (Crazy for Mary), known for humor of the rather coarser kind, have taken on these comedy icons and staged a whole new Stooges adventure. They rely primarily on the classic, family-friendly style of the original. It's quite funny at first, but wears thin over time.

The Stooges tells the story of how Moe (Chris Diamantopoulos), Larry (Sean Hayes) and Curly (Will Sasso) are abandoned as newborns outside an orphanage and lovingly taken in by the nuns working there. A few years later, things look quite different, as the three slobs drive all their guardians, especially Sister Mary-Mengele (Larry David), downright crazy. No wonder that there is no couple willing to adopt the boys. And so, 25 years later, Moe, Larry and Curly are still living in the orphanage. But when they learn that it's facing ruin due to their numerous destructive antics and they need to raise $830,000 to save it from closing, the Stooges head off to foreign lands to save their home. This comes just in time for the sly Lydia (Sofia Vergara) who offers the three rumrunners exactly $830,000 if they turn her spouse around. Because with his demise, she would get to enjoy several million dollars. Too bad that she has not hired professional killers, but full of complete nincompoops for this task - so the chaos is already pre-programmed.

That Peter and Bobby Farrelly are big Stooges fans, the film is quite noticeable. After all, the brothers have long dreamed of resurrecting the Stooges. And when they finally got the chance, it was clear that such a resurrection has to be done in a proper way. All the sound effects that are inextricably linked to the Stooges are also present, such as the finger-in-the-eye poke, headbutts, the shrill nyuk-nyuk-nyuk that Curly always utters when he's nervous, or Moe's almost legendary Nyaaaahhhh! As nice as it is that the Farellys bow to the original in this way, it also brings some problems with it.

For viewers in Germany, the biggest problem might be that the Stooges were far less popular in this country than in the US and are hardly known to anyone today. So the old-fashioned slapstick is not only a bit alienating, but also annoying in the long run. Sure, there are always some good laughs, which prove that this kind of slapstick is timeless in a certain way. Still, this kind of humor pressed into a contemporary story somehow always seems strained. It just doesn't want to form a harmonious overall picture, which clearly lowers the entertainment value of the film.

Neither the actors nor the directors can be blamed for this, because they all clearly show great respect for the original and love for the Stooges. Maybe it's just that not everything that worked fifty years ago can be transferred to the present. Even today, many still laugh at the films of Bud Spencer and Terence Hill. But a remake in the exact same style of yesteryear wouldn't work either. The Stooges is well-intentioned and lovingly executed, but the end result just doesn't work. But if you like classic slapstick, you'll still find enough good laughs to justify a trip to the movies!

Cinema trailer for the movie "The Stooges - Three full-blown stooges take off (USA 2012)"
Loading the player ...