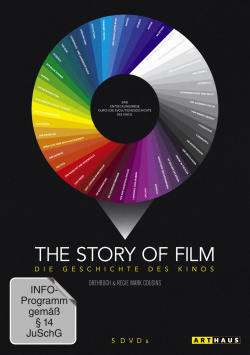 The Story of Film - The History of Cinema - DVD

Content: That film critic, director and presenter Mark Cousins is a passionate film lover has been proven not only on his TV show Scene by Scene, in various articles and publications, but most especially in his comprehensive book The Story of Film. Now Cousins has been allowed to adapt his highly acclaimed work into a ten-part series in which he takes his viewers on an exciting and often surprising journey through the history of cinema. He visits the birthplaces of film, talks to many filmmakers, and takes a close look at landmark classic films. He visits film studios around the world and shows how colorful the film landscape is beyond Hollywood.

The Story of Film, while divided into chronological blocks, is not really a straightforward film history treatise. This is because, as Cousins uses numerous examples to make clear how much directors from different eras influence each other, there are sometimes very large jumps in time within the individual episodes. At first glance, this may seem a bit confusing. But by making such connections, the viewer is brought much more vividly closer to the various aspects that are explored here than would have been the case if Cousins had stuck strictly to a chronological treatise.

What makes the docu-series so special are the subjects and films that Cousins explores in more detail. Of course, he covers the big events like the introduction of sound and color film, the end of the celluloid era, and the dawn of the digital age. Of course, he acknowledges the importance of well-known figures such as Alfred Hitchcock, Steven Spielberg, James Dean, Stanley Kubrick and Quentin Tarantino, and doesn't fail to mention landmark blockbusters such as Star Wars. Anything less would have been impossible for a serious documentary about the history of film. But for much of the ten episodes, Cousins moves outside of Hollywood and takes an in-depth look at the film industry in Europe, China, India, South America, Africa, and even Japan.

You can quickly tell that Cousins approached this documentary with great enthusiasm and that he has a pleasantly idealistic opinion of cinema. While many of his peers think of the film industry as a soulless system ruled by lawyers and studio bosses, Cousins is clear: it's not money, marketing or the studios that make films, but visual ideas. And how different these look and how much they have changed over time, but at the same time remained the same at the core, he makes clear in the ten hours in an exciting, entertaining and very enlightening way.

Even if you can not at all moments share the enthusiasm of Cousins towards certain films or directors, at the high entertainment value and enormous information content of The Story of Film does not change anything. If you are even remotely interested in film theory or film history, if you love cinema and want to intensify that love, this DVD box set is an absolute must! Absolutely worth seeing!

Picture + Sound: In the older film clips, of course, some weaknesses such as blurring, image noise or slight soiling are noticeable. Overall, however, the visuals of the documentary leave as satisfying an impression as the audio, which makes the interviews and commentary sound very powerful and easy to understand. Good!

Extras: Additional bonus material has the box unfortunately not to offer.

Conclusion:The Story of Film is a very comprehensive, complex and exciting journey through the history of cinema, in which Mark Cousins shows not only how much political and social events are reflected in the films of their time, but also how much filmmakers are influenced by the work of their colleagues. In ten episodes, Cousins makes clear how filmmaking has changed over the decades in terms of content, but also technically, and how multifaceted the film landscape is, especially beyond Hollywood. If you're even remotely interested in film theory and history, you simply can't miss this great DVD box set. Absolutely recommended!