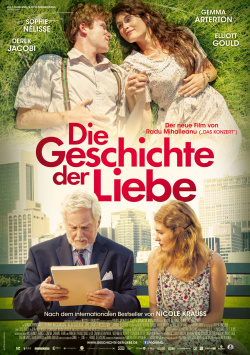 The Story of Love

Leo (Mark Rendall) loves Alma (Gemma Arterton) and Alma loves Leo. That's the way they want it to stay all their lives. He always wants to make her laugh and even dedicates a book to his most beloved woman in the world: The Story of Love. But the turmoil of the Second World War forces the couple to part. And not only this very special love, but also the manuscript of Leo's book seems to have been lost. Many years later, it falls into the hands of a girl in New York, also named Alma (Sophie N&eacute;lisse). And suddenly the fates of the girl and the aging Leo (Derek Jacobi), who also lives in New York, are inextricably linked.

Based on the best-selling book by Nicole Krauss, The Story of Love tells a truly beautiful story about love, family and home. Director Radu Mihaileanu (The Concert) does his best to make the different time levels run coherently side by side and bring them together at the end. Immersed in some really beautiful images and carried by a really good ensemble, this novel adaptation would have had the makings of great cinema full of heart, passion and emotion. But unfortunately one thing in particular stands in the way of that: the extremely weak script.

This is filled with quite a few lengths, with scenes that don't help to move the story forward in any way. It also only marginally succeeds in really drawing the characters in a way that makes you feel for them, feel their great love or loss. This is also due to the fact that the dialogues are sometimes written in a very stilted way. They seem very stilted and hardly have anything authentic about them. This is further emphasized, at least in the original version, by the dialects that aren't exactly believably conveyed, which make all the lines sound very rotely delivered.

As the very big emotional impact is missed, the running time of over two hours also seems way too long. It's a shame that Mihaileanu rarely succeeds in allowing the beauty that underlies the story to fully unfold on screen. He should have spent more time making Leo and Alma's love believable in its full grandeur than on showing old Leo as a not-really-sympathetic grouch. Because this way, as a viewer, you can only partially understand how much the two once really loved each other and you also don't care a little bit if the bitter old man finds his book again one day. Despite a few very nice moments and despite actually good actors there is only one: Conditionally worth seeing!

Cinema trailer for the movie "The Story of Love (USA/Kanada/Frankreich 2016)"
Loading the player ...