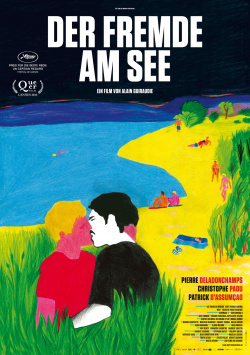 The Stranger at the Lake

Time and again Franck (Pierre Deladonchamps) comes to the picturesque lake in southern France this midsummer. The secluded spot is a popular cruising spot where gay men gather to relax or to have fun with each other in the adjacent wooded area. Here, Franck not only meets the odd Henri (Patrick D`Assum&ccedil;ao), who always sits slightly outside and seems very grateful for friendly conversation. He also meets the charismatic Michel (Christophe Paou), with whom Franck is intrigued from the first moment. Although he observes something that should make him realize that Michel can be an extremely dangerous contemporary, he becomes involved in a passionate relationship with the attractive man. When the body of an apparent drowning victim is found near the cruising spot and the police break into the idyllic scene, Franck had better retreat. But he simply cannot escape the attraction that Michel exerts on him.

With The Stranger by the Lake, director Alain Guiraudie was able to inspire at the Cannes Film Festival, where he was awarded the prize for Best Director in the Un Certain Regard series. Indeed, it is precisely through Guiraudie's staging that the film has a very special atmosphere, somewhere between fascinating and threatening. The place where the entire film takes place is a deceptive idyll. Although the director repeats Franck's arrival here in the best And täglich greüßt das Murmeltier manner in a shot that is always almost identical and that almost exudes a certain monotony, the oppressive mood increases with each of his visits to the lake. The complete absence of film music and the overall very unexciting narrative style intensify this impression even more.

Whether the film would have needed the very explicit sex scenes remains to be seen. But the fact is that the film would not have lost any of its atmosphere if Guiraudie had been a little more subtle here. Even if the whole thing is still quite artfully realized in its realism, oral sex shown in all details or sexual climaxes don't have to be in order to express lust and passion of the particularly intense kind. Since the drama has not exactly a few such scenes at hand, one should be very open to such an explicit representation in order to be able to appreciate the actual qualities of The Stranger at the Lake.

These are particularly rooted in the first half of the film, in which the story is established in a very rousing way, although not much actually happens. But this is where the aforementioned atmosphere comes into play, making it clear to the viewer that it's worth following the action through the calm waters. And indeed, the old wisdom that calm waters can sometimes be very deep soon proves itself again. Unagitated and with a light touch of dry humour, mixed with a constant threat and a tension-generating lack of knowledge on the part of the audience, The Stranger by the Lake really reveals itself to be a very special film in the first hour.

Towards the end, however, the whole thing becomes a little ordinary and the tension that Alain Guiraudie has so carefully built up degenerates more and more into cultivated boredom. Surely, who appreciates French arthouse fare of the special kind, will not be bothered by the rather weak conclusion of the story. But all in all, the last third of the film underlines once again that The Stranger by the Lake is only made for a niche audience, which doesn't mind explicit sex scenes (no matter if homosexual or heterosexual), nor a somewhat unwieldy staging style. And for such an audience then also applies: Worth seeing!

Cinema trailer for the movie "The Stranger at the Lake (Frankreich 2012)"
Loading the player ...