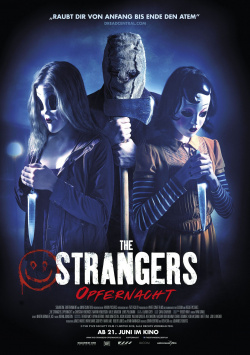 Cindy (Christina Hendricks) and Mike (Martin Henderson) want to spend one more family weekend with their children Kinsey (Bailee Madison) and Luke (Lewis Pullman) at a remote trailer park before the rebellious Kinsey is to be sent away to boarding school. Tempers flare, but the couple do their best to lighten things up. But there's little time for that after they arrive at the deserted trailer park. For suddenly the family is being hunted by a trio of masked killers who seem to know only one goal: to kill everyone before the night is over.

Ten years after Bryan Bertino's surprise hit The Strangers, Dollface, Pin-Up Girl and the Man in the Mask return to terrorize another family in The Strangers: Victim Night. Director Johannes Roberts, who scored a respectable hit in the US in 2017 with the deep sea shocker 47 Meters Down, doesn't really manage to bring even a hint of a new edge to the slasher genre, despite an atmospheric location. That wouldn't be a big deal if the whole thing was thrillingly directed. But weaknesses in the script and the actors stand in the way of just that.

Bailee Madison was already unconvincing as a child actress. Anyone who saw her alongside Adam Sandler in My Fictional Wife will probably remember her very affected acting with horror. She really hasn't learned much in the meantime. Her facial expressions barely change throughout the film and she expresses fear through what appears to be extreme shivering. It doesn't help that the script also has her do some really stupid things.

Originally, the script allows itself to do some extremely stupid and implausible things, which of course won't be revealed here. But this much maybe: Just think of the most hackneyed horror clichés. These then multiplied by a multiple and ready is especially the last act of The Strangers: Sacrificial Night. This really dulls the enjoyment of the film to an extreme. That said, there are definitely some decent moments of suspense and atmospheric creepiness. But this is almost completely covered by the aforementioned weaknesses, so that in the end the result is a very below average horror thriller, which can't hold a candle to the original. Only with very clear cutbacks still worth seeing!

Cinema trailer for the movie "The Strangers: Sacrifice Night (USA 2018)"
Loading the player ...